Waqar Younis inducted into the ICC Hall of Fame

Former Pakistan captain Waqar Younis was inducted into the ICC Cricket Hall of Fame before the start of the first Twenty20 International between Pakistan and Sri Lanka at the Dubai International Cricket Stadium in Dubai Sports City.

Waqar received his commemorative cap from International Cricket Council Chief Executive David Richardson in front of a large and appreciative crowd. He now becomes the 70th male member and fifth Pakistani after Hanif Mohammad, Imran Khan, Javed Miandad and Wasim Akram to be inducted into the ICC Cricket Hall of Fame.

Nicknamed 'The Burewala Express', Waqar is famously known as one half of 'The Two Ws' -- a moniker for the fast bowling pair of Wasim Akram and Waqar. A famed exponent of reverse swing, he claimed 373 wickets from 87 Tests and 416 scalps from 262 One-Day Internationals.

Waqar's Test figures bear ample testimony to his brilliance -- he registered 22 hauls of five wickets or more in an innings, and, on five occasions, took 10 wickets or more in a match. He also boasted the best strike-rate of any bowler with more than 200 wickets in Tests during his playing days -- a record only recently beaten by Dale Steyn.

His best bowling performance in a Test came almost 20 years ago, when he registered match figures of 13-135 against Zimbabwe in first Test in Karachi, having taken 7-91 and 6-44. 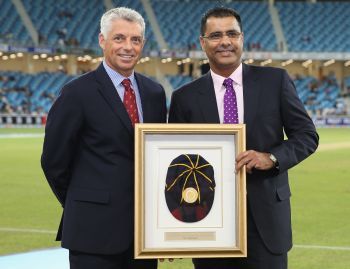 His feats in limited-overs cricket were no less impressive. He remains to date the only bowler to take five wickets in an innings in three consecutive ODIs (On November 4, 6 and 9, 1990). He was also the fastest to the milestone of 400 wickets in ODIs.

Having retired from cricket in 2003, Waqar now plies his trade as a coach and commentator.

Waqar said of his induction in Dubai, "I'm thrilled to be inducted into the ICC Cricket Hall of Fame in front of a lot of my fans here in Dubai.

"Having played some of my early cricket in the UAE, I feel it's fitting that this is the stage for my induction. I would like to express my heartfelt thanks and gratitude to all those people who supported and stood by me during my career, helped me develop as a cricketer, and played a role in making me what I am today.

"Every international cricketer today would aspire to someday be a member of the ICC Cricket Hall of Fame. The fact that those who nominate and vote for future members are distinguished cricket names themselves, lends this elite band a huge deal of credibility.

"It is a huge honour and privilege to be in the same category as icons like Hanif Mohammad, Imran Khan and Javed Miandad. I grew up hearing about their exploits and then ended up playing with the latter two, as well as with Wasim Akram.

"To be in the august company of some of the greatest players the game has ever seen is personally quite exciting for me. A big, heartfelt thanks from me to all the living members of the ICC Cricket Hall of Fame and those from the voting academy, who thought me worthy of this."