Kohli has often expressed his love for Test cricket 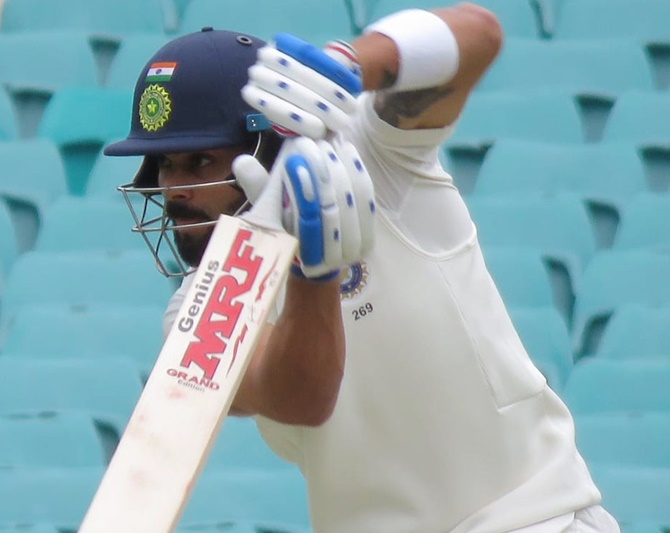 IMAGE: For Kohli, the five-day cricket remains the 'most beautiful format of the game'. Photograph: BCCI/Twitter

Virat Kohli's endorsement of Test cricket has given hope to former England captain David Gower about its future, amid fears that the traditional form is in danger due to the rise of T20s.

The popularity of Test cricket has dwindled after the introduction of the shortest format, which led to the mushrooming of multiple leagues, including the cash-rich India Premier League (IPL), which have witnessed cricketers earning handsome salaries.

While T20 cricket is always played in front of packed houses, most times sparse crowds await Test cricket, unless the matches are held in England and Australia.

Kohli, who is the number one Test batsman in the world, has often expressed his love for Test cricket.

For him, the five-day cricket remains the 'most beautiful format of the game', despite the hype surrounding the T20 format.

Gower believes Kohli's comments after losing the Test series against England 1-4 this year are significant.

"We had a fantastic series against India, closer than the margin suggests," said Gower during the inaugural Ranji Memorial Public Conversation on Cricket in London.

"It is a reflection of the balance of power if Virat says that -- you've got a lot of people who will listen," said the 61-year-old, adding that the launch of next year's World Test Championship will help in the popularity of Test cricket."

Test cricket could receive a fillip if Kohli can break India's jinx in Australia by winning the four-Test series, which starts with the opening match at Adelaide on December 6.

India have never won a Test series in Australia in 11 attempts.

One of the most dominant Test nations in the past, the West Indies have seen a massive decline in the popularity of the format and Gower said it won't be an easy task to revive the five-day form in the Caribbean.

"You are talking about socio-economic problems and it's disjointed." Of some consolation to traditionalists is that the debate is nothing new, with Test cricket still alive and kicking.

"In this ultra-modern age, counter-attractions have multiplied many times....They (young people) just haven't the time to devote to cricket or is it they just can't be bothered to dash home to tea, then to the local cricket ground?," he added.