The Board of Control for Cricket in India has recommended young batsman Virat Kohli for the prestigious Arjuna award and former captain Sunil Gavaskar for the Dhyanchand lifetime achievement honour.

"We have recommended only these two names," BCCI sources informed, making it clear that no cricketer's name was recommended for the Rajiv Gandhi Khel Ratna this year. 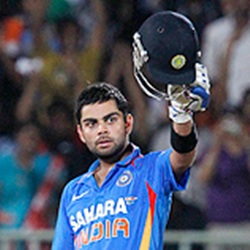 Gavaskar, the only Indian cricketer recently named by former England umpire Dickie Bird in his select World Test XI, retired from the game in 1987 after a glorious 16-year career during which he became the first to score 10,000 Test runs.

He played in 125 Tests and was a member of the victorious Indian World Cup-winning team, led by Kapil Dev, in 1983. He then led the country to another major one-day title, the World Championship of Cricket in Australia two years later.

Gavaskar, who will turn 64 on July 10, is currently a television commentator and columnist.