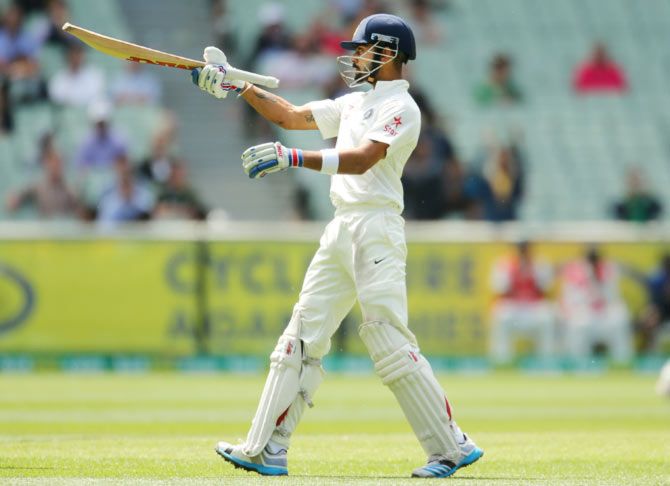 India captain Mahendra Singh Dhoni and Ravichandran Ashwin frustrated Australia's push for victory on day five of the third Test in Melbourne on Tuesday, but the draw was enough for the hosts to complete an emphatic 2-0 series win with a game in hand.

With Australia needing seven wickets from the final session at the Melbourne Cricket Ground, their bowlers could only manage three as Dhoni and Ashwin survived a nervous final hour to push India to safety.

India were 174-6 when Australia captain Steven Smith conceded the draw with four overs remaining, with Dhoni unbeaten on 24 and Ashwin on eight. The tourists were 210 short of their victory target. Australia declared on 318-9 at lunch, setting India 384 to win in 70 overs.

Statistical highlights from the fifth and final day of third Test match between India and Australia in Mebourne, on Tuesday:

- Virat Kohli's 54 off 99 balls is his 10th half-century in Tests -- his third against Australia.

- Rahane has totalled 348 at an average of 58.00, including a hundred and two fifties - his best ever in a Test series.

- Rahane's 48 is his highest against Australia in the second innings.

- In drawn Tests, Rahane's average is excellent - 431 in seven innings at an average of 61.57, including two hundreds.

- After playing 13 Tests in succession, a Test involving Australia and India has not produced a result.

- Dhoni, as captain, figures in a drawn Test match against Australia for the first time. He has won eight, lost four and drawn one out of 13 contested - winning % 61.53.

- Kohli has become the first Indian batsman to amass 200 runs in a Test match twice in the same series against Australia in Australia. On his captaincy debut in the Adelaide Test, he had managed 256 (115 + 141).

- Kohli became the second batsman to score 150 and a fifty in the same Test match at Melbourne. England's Herbert Sutcliffe was the first to record the feat - 176 and 127 in January 1925.

- Shaun Marsh became the third Australian player to be run-out on 99 - the first two batsmen were Bill Brown vs India in February 1948 and Arthur Morris vs South Africa in February 1953 - both at MCG.

- Melbourne has registered five instances of 99 run out out of 16 witnessed - the most at a single venue.