- The 27-year-old Indian right-hander batted five innings in the tournament, scoring a total of 273 at an average of 136.50 with a strike-rate of just under 147. 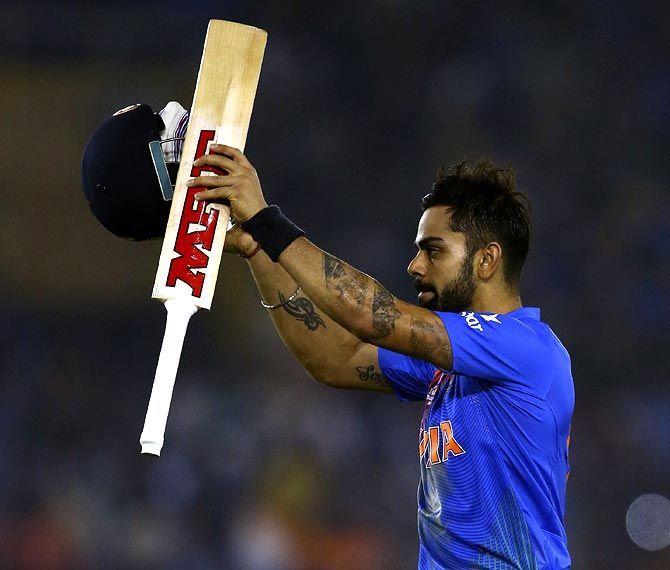 India's batting sensation Virat Kohli was named as the men's player of the tournament at the ICC World Twenty20, at Eden Gardens in Kolkata, on Sunday.

This is the second successive time Kohli has won the award, after he was also named as the player of the 2014 tournament in Bangladesh following his 319 runs which helped India reach the final.

Kohli was the unanimous choice of a select group of former cricket stars and highly respected commentators following his sensational form in the tournament, which helped India reach the semi-finals.

Reacting to the announcement, Kohli said: "Although I'm disappointed that we were not able to make it through to the final and win the ICC World Twenty20 title on home soil, I'm proud to be named player of the tournament.

"As a team, we have all loved the experience of playing in this event in front of big, passionate home crowds and I'm pleased the tournament in India has been successfully staged.

"And I'd like to add my congratulations to the West Indies men's and women's squads for their successes."

The 27-year-old batted five innings in the tournament, scoring a total of 273 at an average of 136.50 with a strike-rate of just under 147. He scored 23 against New Zealand, 55 not out against Pakistan, 24 against Bangladesh, 82 not out against Australia and 89 not out against the West Indies in the second semi-final.

During their deliberations, the members of the panel discussed several names, highlighting such players as England's Joe Root, Samuel Badree of the West Indies and Tamin Iqbal of Bangladesh, who scored more runs than any other player. But the panel decided Kohli's crucial contributions to his team's run in the tournament were deserving of the player-of-the-tournament award.

Kohli is the fifth man named as the player of the tournament at an ICC World Twenty20 event. Previous winners include Sri Lanka's Tillakaratne Dilshan (2007), Shahid Afridi of Pakistan (2009), Kevin Pietersen of England (2010) and Australia's Shane Watson (2012).