Kohli has five years of good cricket left in him: Shastri 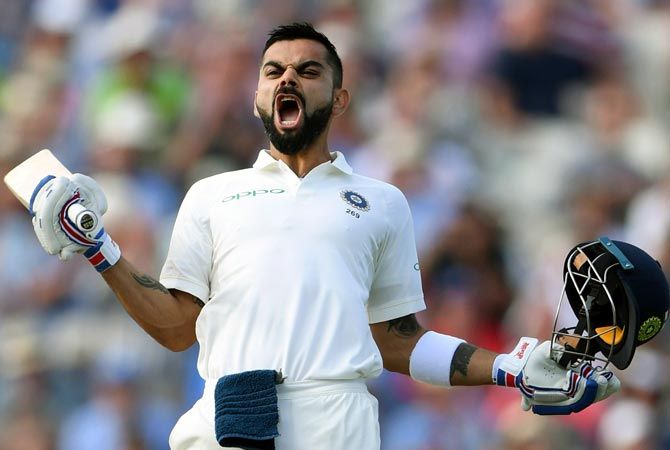 IMAGE: 'Virat Kohli is in-your-face and passionate on field. Off the field, he is totally opposite.' Photograph: Stu Forster/Getty Images

Former Team India head coach Ravi Shastri has termed Virat Kohli a beast on the field but said the former skipper is totally opposite when he is not playing the game.

Kohli had stepped down as the Test skipper after India suffered a Test series loss against South Africa. Shastri said the challenge for Kohli is now to maintain the same energy when he is playing as a player and not as the captain of Team India.

"Virat is like a beast on the field. He is a terrier. Once he enters the ground, he wants to compete and is not worried about anybody. He is in-your-face and passionate. Off the field, he is totally opposite," Shastri told Shoaib Akhtar on the former Pakistan pacer's YouTube channel.

"Absolutely calm, chilled... there is no issue with him. He is 33. He has been contributing as a captain. The challenge comes when you are not captain after a span of time."

"Then to still have the energy to play as a player, get runs, and help India win. If he does that, he would have completed a full circle," he added.

Shastri wants Kohli to calm down and focus on his batting. He feels the former India skipper has five years of "good" cricket left in him.

"He realises he is 33, he realises he has five years of good cricket ahead of him. If he can calm down, focus on his batting, take one game at a time, probably take a break from the game as well. I think if he sits out for two or three months or takes a break for a series, it would do him a world of good," Shastri said.

"To come back and play those three-four years as king, absolute king. You know where he is clear mentally, knows exactly what his job and role are, and then plays as a team player, that's where I want to see Virat Kohli now. To come, contribute big time as a team player and help the team win," he added.

India white-ball skipper Rohit Sharma has cleared his fitness test and as a result, he will be available to lead the side in the upcoming series against West Indies.

Shastri also pointed out how Rohit has evolved his game in the last few years.

"Now, Rohit is laid back. It was sometimes that you got the feeling that the game came too easy to him, till he realised that 'God has given me this gift and now let me also work harder and make the most of it'. And when in full flow, there are few batters who play like him," said Shastri.

India will now lock horns with the West Indies in a white-ball series starting February 6.

The three ODIs will be played at the Narendra Modi Stadium, Ahmedabad and three T20Is will be held at the Eden Gardens, Kolkata.