India discard Yusuf Pathan played a captain's knock with a strokeful 116 as Baroda scored a narrow one-wicket win over Saurashtra in a thrilling high-scoring West Zone leg of the Vijay Hazare Trophy One-Day Championship match in Pune on Monday.

Pathan shared a crucial 79-run stand with Vishnu Solanki for the fifth wicket to resurrect the Baroda innings after they were reduced to 48 for four in the 13th over while chasing 300 for a win at Poona Club Ground.

Pathan hit nine fours and four sixes in his 102-ball knock and he was the eighth-man out after having taken his side to the threshold of victory. Baroda romped home with four balls to spare as they reached 304 for nine.

Pacers Saurya Sanandiya and Jaydev Unadkat grabbed four and three wickets respectively while Chirag Jani and Nayan Doshi chipped in with a wicket each.

Earlier, Saurashtra rode on Rahul Dave (96) and Sheldon Jackson's (61) fine knocks to post 299 for seven after being sent into bat. Chirag Jani and Pratik Mehta were the other main contributors with 46 and 43 respectively.

For Baroda, Lukman Meriwala and Sunit Singh took two wickets apiece while Abhijit Karambelkar and Yusuf Pathan got a wicket each.

Shami stars in Bengal's hard-earned win
Kolkata: Riding on an all-round show from Shami Ahmed, defending champions Bengal kept themselves in the hunt for a knock-out berth with a narrow three-wicket win over Jharkhand in their East Zone leg of the Vijay Hazare Trophy match at Eden Gardens.

Chasing 162 from 38 overs in a rain-curtailed match, Bengal were in trouble with 136 for seven in the 32nd over but Shami blasted 23 off only eight balls with three huge sixes and a boundary after having taken three wickets while bowling.

Shami spanked Rohit Shukla for consecutive sixes before hitting the winning runs with another big hit in the 34th over.

Bengal now have eight points from two matches, behind leaders Assam (10) while Jharkhand (four) are placed third in the East Zone table.

Put into bat after the match was delayed for two hours due to damp condition in the wicket, Jharkhand were bundled out for 161 in 37.2 overs.

Subroto Ghosh (40) gave Jharkhand a good start but the middle-order could not capitalise on the start with a tidy bowling from the trio of Shami, Laxmi Ratan Shukla and Iresh Saxena who claimed three apiece.

In reply, Bengal once again had a jittery start as their experiment of opening with Saurashish Lahiri (5) failing yet again while the top-order also could not contribute to be reduced to 29 for three.

Wriddhiman Saha (37) put on a bravefront taking the team closer to target but left-arm medium pacer Jaskaran Singh (3/38) kept Jharkhand in the target reducing them to 136 for seven in the 32nd over.

With 37 required from 26 balls, Shami shattered Jharkhand's hopes as he charged on Rahul Shukla in the 32nd over that yielded 16 runs.

Shami finished it in style with a winning six of Jharkhand skipper Shahbaz Nadeem in the next over.

Viswanadh blasted five boundaries and one six in his unbeaten innings, while Sachin Baby also contributed with a strokeful 61 off 42 balls, studded with seven fours and one six, to help Kerela overhaul the target in 46.3 overs.

Earlier, S Sreesanth and SS Warrier snapped two wickets each, while P Prasanth accounted for one to help Kerela restrict Tamil Nadu to 257 for seven in 47 overs after TN had decided to bat.

For Tamil Nadu, Rahil Shah returned with a four wicket haul, giving away 52 runs but still could not stop Kerela from running away with the match.

Put into bat at the Jadavpur ground in Saltlake, Tripura were skittled out for 165 in 45.4 overs with off-spinner Rakesh and skipper Biplab Samantray taking two wickets each.

Chasing the paltry target, Odisha batsmen put up yet another listless display to be reduced to 87 for five in the 24th over.

Rakesh then steadied the batting with a Lagnajit Samal (33 not out) as they put up 51-run for the sixth wicket before the latter got out.

Odisha now have three points with their maiden win but their chances to qualify for the knock-outs appear bleak as they lie on fourth spot ahead of bottom-rung Tripura (-1 point).

Needing 287 to win, Vidarbha were bundled out for 190 runs in 42 overs, losing the plot in the middle after being comfortably placed at 114 for two.

Batting first, Uttar Pradesh rode on Nath's 47-ball 70, laced with eight fours and two sixes, and half-centuries by openers Prashant Gupta and Tanway Srivastava to post a challenging 286 for 6.

Apart from the trio, skipper Suresh Raina also played his part with the bat, scoring 35 off 47 balls with the help of three sixes.

Nath's blitzkrieg was studded with eight fours and two sixes, which helped the visitors score close to 300-run mark.

For Vidarbha, Amol Jungade picked up three wickets for 52 runs while Shrikant Wagh, Mangesh Joshi and Akshay Kolhar chipped in with a wicket apiece.

For Vidarbha, opener Kolhar played a fine knock of 76 off 97 balls as none other batsmen could hang around for long. Urvesh Patel was the other notable contributor for the hosts with 36.

Karnataka qualify for knock-outs
Porvorim: Karnataka registered their fourth successive victory in the South Zone leg of the Vijay Hazare beating Hyderabad by 47 runs to qualify for the knock-out stages of the competition.

Karnataka now have 16 points from four games and are assured of a berth among 10 teams who will be vying for the top honours.

Put into bat, Karnataka posted a formidable total of 305 for nine, largely due to centuries from openers Lokesh Rahul (110) and Robin Uthappa (103), who added 206 for the first wicket.

Manish Pandey with a 39-ball-42 was the only other contributor. In reply, Hyderabad were all-out for 258 in 46.4 overs. For Hyderabad, Hanuma Vihari (84) and Bavanaka Sandeep (72) tried their best with a 140-run partnership for the third wicket but once both were out within 20 runs of each other, there was no stopping Karnataka.

Medium pacer SL Akhshay was the pick of the bowlers with figures of four for 50 while skipper Stuart Binny's military medium pacers also fetched him four wickets for 56 runs.

Opting to field after winning the toss, Madhya Pradesh bowled out Rajasthan for 211 in 48.4 overs, and then comfortably chased down the target with 68 balls to spare at the Holkar Cricket Stadium. The 30-year-old Saxena struck 15 fours during his 152-minute stay at the crease.

Anurag Singh was the best Madhya Pradesh bowler with figures of three for 41, while there were two wickets each for Ishwar Pandey, Anand Rajan and Rameez Khan.

Khan also did well with bat, scoring a patient 46 off 69 balls with the help of six fours. More importantly, he was involved in a stand of 87 for the third wicket with Saxena, after the later added 83 for the second wicket with opener Anand Singh, who scored 32 off 40 balls.

Dishant Yagnik top-scored for Rajasthan with a knock of 63 off 71 balls. He hit three fours and two sixes during his stay in the middle. 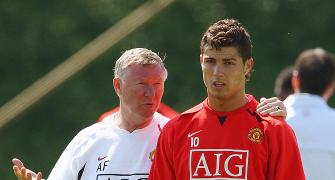