Australia's Nathan Coulter-Nile slammed 92 from 60 deliveries to register the highest score by a No 8 batsman in a World Cup. 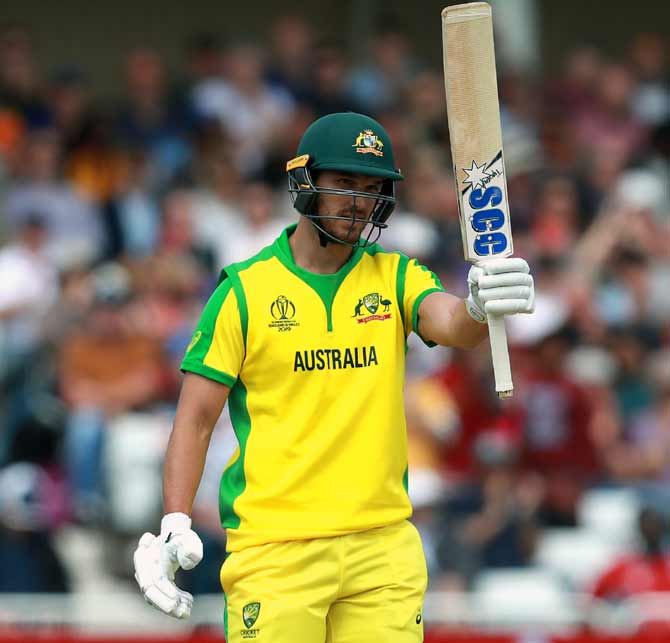 Nathan Coulter-Nile's prediction that he would face a barrage of short balls from the West Indies was hardly outlandish but the Australian all-rounder's insistence that he was ready to cope with it ended up looking downright prescient as he set a World Cup record.

After the defending champions began their campaign with an untroubled victory over Afghanistan in Bristol, Coulter-Nile spoke briefly about his role as the team's first-change bowler, entrusted with following Mitchell Starc and Pat Cummins.

Having promised full-blooded aggression from the Australian fast bowlers in their second match against West Indies, Coulter-Nile said that as a batsman he fully expected similar tactics from the opposition.

The 31-year-old from Western Australia then added with a smile that he thought he could deal better anyway with short-pitched balls than he would if he had to face straight deliveries.

How right he was.

At Trent Bridge, after West Indies had reduced Australia to 79/5, Coulter-Nile dealt effectively with everything, short or full, that the Caribbean quicks hurled at him to score 92 from 60 deliveries, including eight fours and four sixes.

That tally was not only his best one-day total but also the highest by someone batting at number eight in a World Cup.

To underscore the value of his contribution, a statistic released during the match said the average score by an Australian number eight since the 2015 World Cup had been 16.3.

Yet the start of Coulter-Nile's innings could hardly have been less auspicious. He left his first delivery from Andre Russell which shaved the off-stump and top-edged the second with an attempted pull which fell harmlessly on the leg side.

A pushed drive for four and a wafted leg-side boundary restored his composure and he brought up his maiden international one-day half-century with a six off Carlos Brathwaite.

He survived a dropped catch on 61 before smiting consecutive sixes off Brathwaite. He was finally caught by captain Jason Holder off the same bowler four runs short of what would have been an ODI record for a number eight. 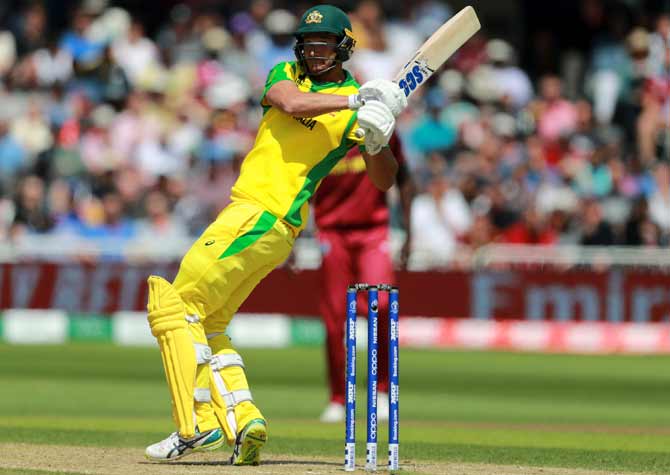 His innings, though, would not have been possible had it not been for the tenacity and relentless concentration of Steve Smith against an unremitting barrage of short-pitched bowling from the West Indies pace quartet of Oshane Thomas, Sheldon Cottrell, Brathwaite and Holder.

The West Indians regularly clocked around 140 kph and extracted nasty bounce from the pitch in the early part of the Australian innings.

Smith swayed inside the bouncers but he did suffer a painful blow to his right hand when a hostile delivery from Thomas forced him on to the back foot.

Batsman and bowler glared at each other briefly and Smith took off his glove to examine his forefinger, flexing it several times before deciding he did not need any treatment.

After Australia took the field having posted an impressive 288 following their early struggles, Coulter-Nile replaced Cummins to bowl the eighth over with West Indies at 41/2.

He conceded boundaries off the last two balls and his first four overs cost 20 runs. Returning for a second spell, two more overs went for a further 18 runs and, after conceding boundaries from the last four balls of the match, he eventually finished with 0/70 from 10 overs.

But more importantly, the Australians had completed a typically determined comeback to win by 15 runs.

Coulter-Nile has been troubled by frequent injuries and has also faced stiff competition for a place in the Australian pace unit against Starc, Mitchell Johnson and Josh Hazlewood – with James Faulkner the first choice as all-rounder.

He was given an opportunity to clinch a place in the World Cup squad when Starc and Hazlewood were injured during the Australian summer and was ultimately selected ahead of the latter, even following his return to fitness.

It may not have been his best day with the ball but Coulter-Nile's match-winning innings at Trent Bridge will surely have clinched his place for the duration of Australia's World Cup campaign at least.