'I opted against reporting the matter to the PCB's Anti-Corruption Unit as I was concerned the information would be leaked out and not remain confidential.' 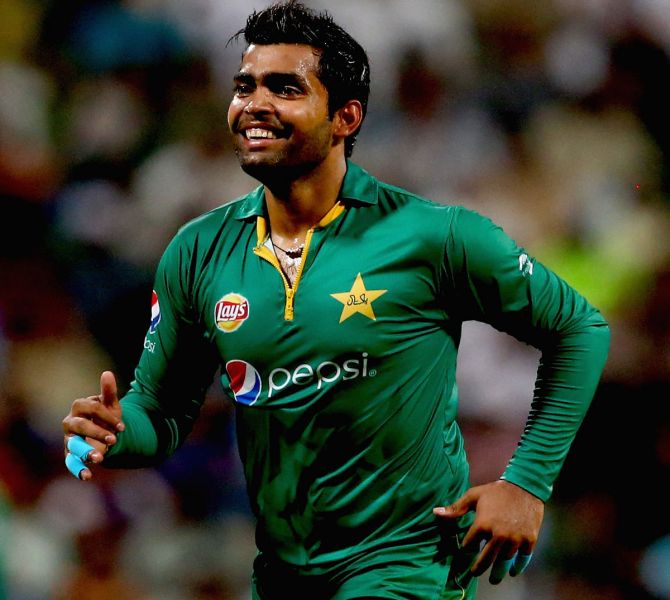 IMAGE: Umar Akmal was suspended in February last year for failing to report approaches to him to engage in corrupt practices before the 2020 Pakistan Super League competition.. Photograph: Francois Nel/Getty Images

Pakistan batsman Umar Akmal on Saturday claimed that he did not report to Pakistan Cricket Board about the spot-fixing approach made to him which led to his ban last year as he thought the information would not remain confidential.

Akmal is now eligible to resume his cricket career after the Court of Arbitration for Sports (CAS) on Friday reduced his suspension to 12 months and imposed a fine of 42.50 lakh Pakistani rupees for breaching the Anti-Corruption Code.

Akmal was initially banned for three years from all cricket activities on February 20 last year for not reporting approaches made to him for spot-fixing in the Pakistan Super League.

"I opted against reporting the matter to the PCB's Anti-Corruption Unit as I was concerned the information would be leaked out and not remain confidential," he told reporters in Lahore.

He also claimed that he had gone to meet PCB chairman to inform him about the spot-fixing approach but could not meet him.

"I had every intention of reporting the matter. I went to meet Board chairman to tell him the approach made to me to spot-fix in Pakistan Super League. Unfortunately, I could not meet him as he was busy and this issue happened," Akmal said.

"I have never been involved in such practices because to me to play for Pakistan is the biggest honour," he added.

He said it was bad luck that before he could pass on the information to the PCB chairman, the matter went to ICC's Anti-Corruption Unit which charged him for not reporting the spot-fixing approach.

Akmal was banned for three years from all cricket by the PCB's Anti-Corruption Tribunal in February last year. Later, the ban was reduced to 18 months by an Independent Adjudicator.

But the PCB and Akmal both went to the Court of Arbitration for Sports with the former appealing for a longer ban on the batsman and the latter asking to set aside the ban altogether.

On Friday, the CAS rejected the PCB's appeal for a longer ban but confirmed one breach of the Anti-Corruption Code by Akmal, imposing him a 12-month ban and fine of 4.2 million rupees.

The CAS also said both parties would bear the legal costs of the case themselves.

The 12-month ban means that Akmal has completed it on March 19 and he is now eligible to resume cricket.

Akmal said he would cooperate with the PCB in every manner in the rehabilitation process and do everything to get back to playing cricket as soon as possible.

"Cricket is my bread and butter and I know how much loss I have suffered in the last one year away from the sport. I want to resurrect my Pakistan career and hopefully, I can do that," he said.

"I have learnt a lot in these last 12 months and hopefully I can just focus on cricket now as there is a lot of cricket left in  me."