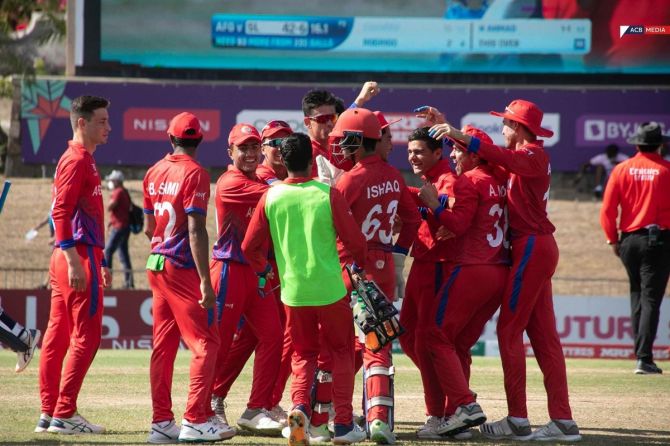 Their late arrival in the Caribbean had forced the ICC to rework the fixtures of their group matches but Afghanistan, with their magnificent run to the semifinals of U-19 World Cup, ensured the tweaking by the apex body was worth it, even if it meant rescheduling as many as four matches.

Accustomed to dealing with issues far removed from and bigger than cricket, the battle-hardened Afghanistan team will chase history on Tuesday, in a sport that has often been a soothing balm for the country's many battered souls.

Having punched above their weight, they now face England in the Super League semifinals of the U-19 showpiece at Sir Vivian Richards Stadium, an appropriate setting for those seeking inspiration for doing things in cricket which only the man after whom the venue is named could do in his heydays.

Afghanistan will create history if they are able to beat fancied England, for they have never been to the final of the U-19 World Cup.

If their entry into the tournament was not bereft of drama, thanks to visa-related issues, no less dramatic was their march to the last-four stage.

The odds were heavily stacked against them when they posted just 134 on board after Sri Lanka asked them to take first strike in their quarterfinal match but Afghanistan produced a superb performance with the ball to bundle out the island nation for 130 in 46 overs at Coolidge Cricket Ground in Antigua.

Before that, having obtained the necessary permission to travel to the West Indies, Afghanistan won all three matches in the group stage.

It is only the second time, the first being the 2018 edition in New Zealand, that Afghanistan have made it to the Super League semifinals of the U-19 World Cup.

However, England will undoubtedly be their biggest challenge.

England are widely known for their batting depth in white-ball cricket and Jacob Bethell is one name that might be creating problems for the Afghanistan bowlers.

The batting all-rounder from Warwickshire displayed his prowess in England's quarterfinal win against South Africa at the same venue. He smashed 88 off 42 balls at a strike-rate of 209.52, the highest for any Englishman in an innings of at least 50 runs in the U-19 World Cup.

Bethell, who was born in Barbados and idolises Sir Garfield Sobers, has scored 201 runs at an average of 50.25 and a strike-rate of 112.92 and hit two 50s in four innings so far.

England will be hoping he continues that form against Afghanistan, though they also have others capable of contributing to the team's cause.

Captain Dunith Wellalage led from the front as Sri Lanka defeated South Africa by 65 runs to advance to the fifth place play-off at the ICC U-19 men's World Cup.

Tournament's leading wicket taker Wellalage shone with the bat as he struck 113 from 130 balls to help Sri Lanka post 232 for 6 on Sunday.

Chasing the target of 233, the Proteas scored well but lost wickets cheaply as they were bundled out for 167 as Sri Lanka set up a meeting with either Bangladesh or Pakistan.

Sri Lanka won the toss and Wellalage chose to bat and it was not long before the star man was out in the middle.

The left-arm seamer then dismissed Wickramsinghe three balls later before Sakuna Liyanage went for an eight-ball duck to bring Wellalage out to the middle with Sri Lanka precarious on 25 for 3.

Alongside Shevon Daniel, the skipper added 62 runs before forming an even more fruitful partnership with Ranuda Somarathne, putting on 130 runs for the fifth wicket.

Wellalage was eventually dismissed by Maphaka but only after hitting 113 for his first century of the tournament.

Somarathne ended on an unbeaten 57 as Sri Lanka set South Africa a chase of 233, which would prove too much for the Proteas.

Opener Jade Smith was run out for one as Sri Lanka took regular wickets to stint South Africa's progress.

The Proteas were scoring above the required run rate but frequent dismissals hampered their progress as the Sri Lankan bowlers split the wickets between them.

In another match, Uganda did not let the rain dampen their spirits as they beat Scotland by 51 runs in a shortened match to earn 13th place overall.

The 13th-place play off between Uganda and Scotland got off to a delayed start in Diego Martin as rain prevented the two sides taking the field for over an hour and the game was initially reduced to 45 overs a side.

Both were eventually dismissed by Jamie Cairns, two of the left arm spinner's four caught and bowleds, on his way to the best bowling figures of the tournament with six for 24.

Cairns took the final wicket of Edwin Nuwagaba to bowl Uganda out for 226 with 14.2 overs of their innings remaining.

Charlie Tear was out for a first ball duck, with Muhaymen Majeed following him back to the dugout not soon after having both been dismissed by Juma Miyaji before Oliver Davidson and Tomas Mackintosh steadied the Scottish ship with a partnership of 46 runs.

Jack Jarvis then came in to replace Mackintosh and scored quickly as he added 37 off 33 balls but rain would intervene again with Scotland on 122 for seven and two new batters at the crease.

The weather brightened but Scotland's task only got harder as they were now chasing the same target but only had 11 overs in which to do it.

Captain Charlie Peet played a cautious innings as he looked to stay the distance, but could not find a partner, as Rafay Khan fell for 10 and Cairns a duck before Sean Fischer-Keogh's dismissal left him stranded on 29 not out.