Madhya Pradesh pacer has first-ball wicket before reducing Bangladesh to 23-4 in 6.2 overs in a rattling spell of 6-3-4-4 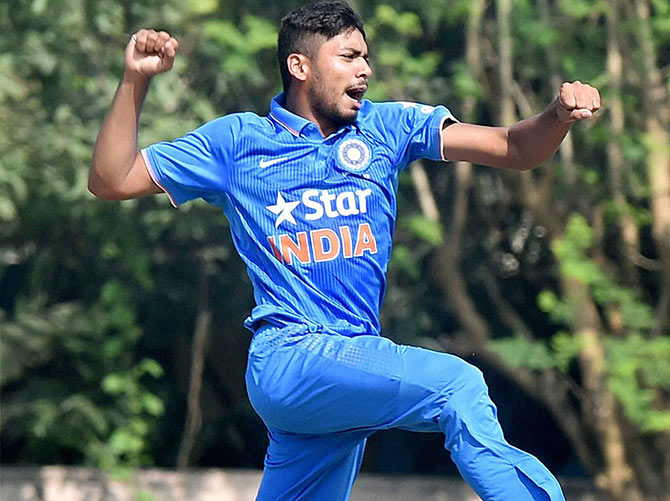 Defending a paltry 159, the home side was off to a splendid start as the six foot two inches tall pacer from Madhya Pradesh had a first-ball wicket before reducing Bangladesh to 23-4 in 6.2 overs in a rattling spell of 6-3-4-4.

The visitors were eventually bundled out for 76 in 22 overs.

Khan was well-supported by left-arm pacer Kanishk Seth (2-45) at the other end. The duo bowled 12 overs in tandem before the off-spin and leg-spin pair of Mayank Dagar (1-7) and Zeeshan Ansari (2-1) wiped off the tail and earned India a bonus point.

Off the first delivery, Khan produced an off-cutter that sharply cut in; a ball later Bangladesh opener Mohammad Saif Hasan chose to leave the delivery, which went on to clip his off-stump.

It was a superb spell with the new ball; the generated bounce and movement off the seam troubled the Bangladesh top order.

In his next over, Khan had Pinak Ghosh (1) caught behind.

From the Bangladesh perspective, none of their top-order batsman looked to hold on as they played some casual shots and wickets fell at regular intervals in the face of a small target.

"We've been playing together for about three years now and this is for the first time I've seen such an atrocious batting. I totally blame the batsmen; they did not apply themselves and we lost the game," Bangladesh skipper Mehidy Hasan Miraz told newsmen after the defeat.

"But we hope to bounce back; it's a long tournament as we'll play each other twice." 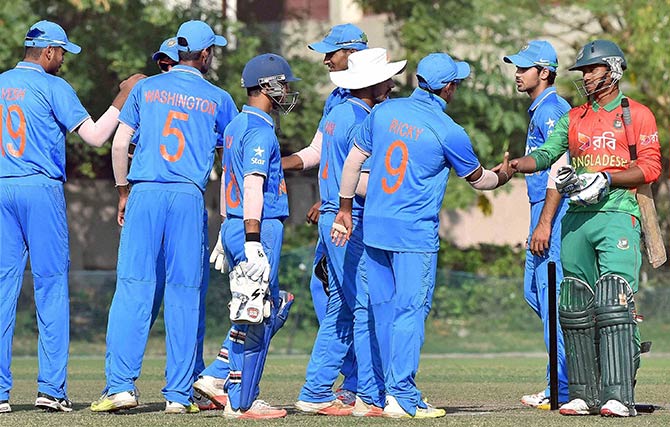 IMAGE: India under-19 players after winning the match against Bangladesh. Photograph: PTI

India have five points, while Bangladesh are yet to open their account in the tournament, also involving Afghanistan.

India takes on Afghanistan on Saturday in their second match.

His first wicket was a gem; he held on to a superb low catch on his follow through to dismiss Ishan Kishan. Off the next delivery, he bowled Jharkhand's Virat Singh.

The Indian youngsters too failed to come up as a unit and were reduced to 76-7 as the Bangladeshi skipper (3-31) with his off-breaks emerged wrecker-in-chief.