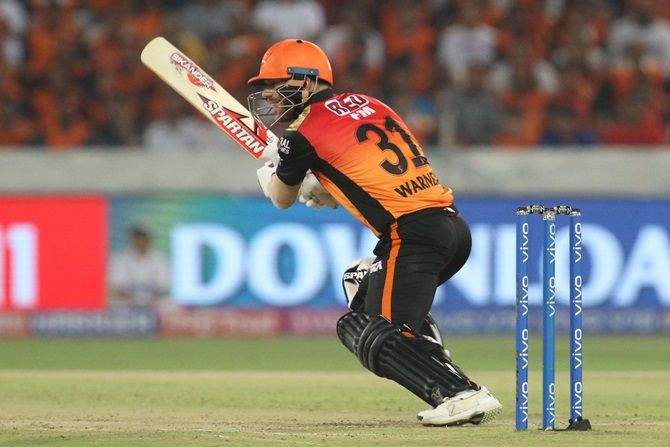 Propped by Sanju Samson's century (102 not out), the Rajasthan Royals gave Sunrisers Hyderabad a huge task, asking them to chase down 199 mfor victory in their Indian Premier League game in Hyderabad on Friday, March 29, night.

And boy, did Hyderabad do it with ease!

With a decent bowling attack, comprising Dhawal Kulkarni, Jaidev Unadkat, Jofra Archer, one would have expected Rajasthan's frontliners to get the early breakthroughs. But neither Kulkarni nor Spinner Krisnappa Gowtham could strike early, and with the pitch as flat as an iron board, Hyderabad Opener David Warner got going in no time.

Starting from where he left off in Hyderabad's opening game against the Kolkata Knight Riders, Dave creamed the Rajasthan bowling in all directions of the field, not allowing any bowler to settle down.

Like a man on a mission -- not only to lead Hyderabad to victories with his bat, but also find a place in the Australian World Cup squad -- Warner tore into the bowlers from one end while his batting partner Jonny Bairstow just nudged the ball around ensuring the strike was with the Aussie.

Warner was in such good touch that he raced to his half-century -- his second in as many matches -- inside 6 overs.

Even after the Powerplay overs, with the field spread out, Warner pushed himself and his partner to take tight singles and twos, ensuring the required run rate was always under control.

Had it not been for Warner giving Hyderabad the early impetus, the target would have always been a difficult one to breach.