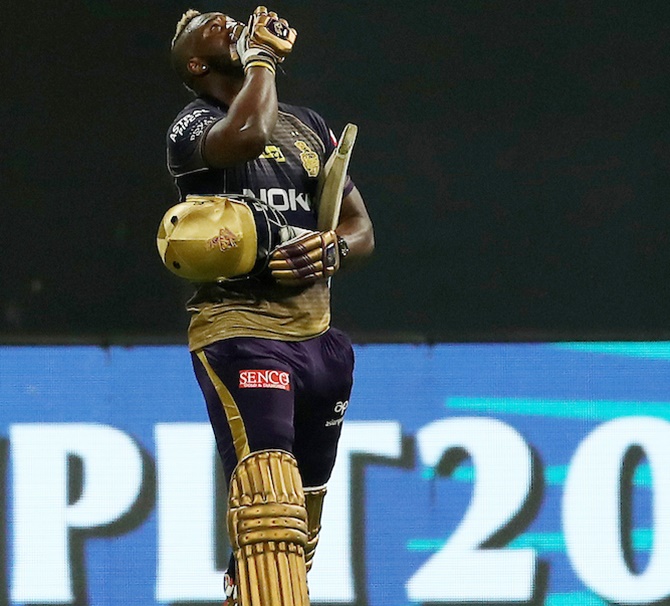 IMAGE: Russell's blistering knock made all the difference. Photograph: BCCI

Russell's blistering knock made all the difference as Kolkata Knight Riders beat RCB by 5 wickets in their IPL game in Bengaluru on Friday, April 5.

Kolkata needed 66 runs from 4 overs and RCB would have thought that they had the much elusive victory in their hands. But nothing is impossible for this 30-year-old Jamaican.

Mohammed Siraj seemed to have things under control when he bowled two consecutive dot balls in the 18th over. But the tide turned in KKR's favour after bowling a wide, Siraj bowled his second beamer. Russell found his range as he hit the beamer for a six.

Siraj was taken out of the attack and Marcus Stoinis, who finished the over, was taken for two big sixes as Russell reduced the equation to 30 runs from two overs.

It was an absolute nightmare for RCB, but Kohli handed the 19th over to the experienced Tim Southee; Shubman Gill sensibly took a single and gave Russell the strike.

That was the end of RCB's hopes as Russell went berserk and smashed 4 sixes and a 4 in the over to seal the deal.

By the time the last ball of the penultimate over was bowled, the scores were level, and Gill scored the winning single in the last over.