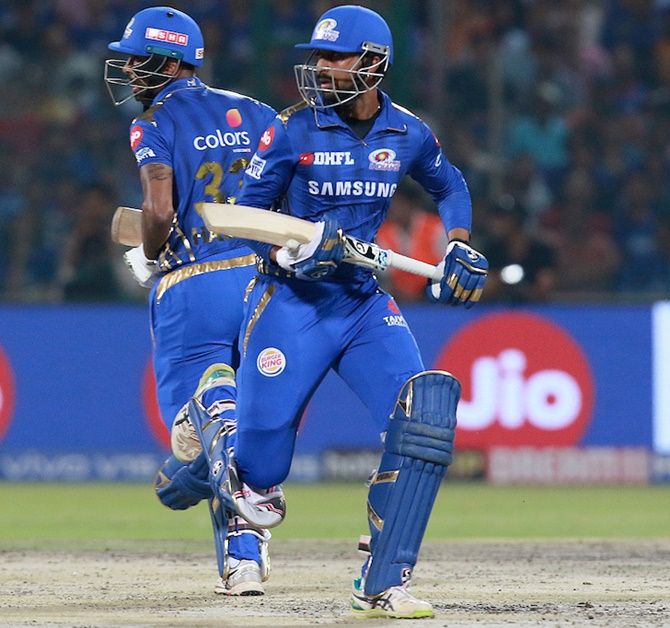 IMAGE: A 40-run win in the end for Mumbai Indians proved that the Pandyas's late charge was crucial. Photograph: BCCI

Mumbai Indians didn't get off to a great start in the IPL tie against Delhi Capitals.

The visitors made a measured start with Rohit Sharma hitting the only boundary in the first 3 overs which yielded just 16 runs.

By the first powerplay, Mumbai reached a promising 57 for no loss.

After spin was introduced, Amit Mishra dismissed Rohit with his very first ball. Axar Patel was brought in from the other end and he too made instant impact by removing Ben Cutting, leaving Mumbai at 63/2.

Runs were hard to come by with the two spinners in operation, creating pressure which led to the run out of the well-set Quinton de Kock (35) following a terrible mix up with Suryakumar Yadav (26).

Mumbai Indians lost their way in the middle and the visitors were struggling at 104/4 in the 16th over.

Nalini and Himanshu Pandya's boys -- Krunal and Hardik -- assessed the situation, ensured they were settled before playing vital cameos at the death, with both going after Keemo Paul in the 18th over that leaked 17 runs.

Hardik took the initiative and played some mind-blowing shots against Chris Morris and Kagiso Rabada.

He whipped Morris for a 6 before pulling off a helicopter shot off Rabada in the final over.

The Pandyas, with their 54 run partnership for the 5th wicket, did enough that saw Mumbai score 168/5.

Delhi Skipper Shreyas Iyer acknowledged the Pandyas's late surge and said, "We gave away 20 runs more on this wicket."