'It's time to groom the youngsters. Be it Rishabh Pant, Sanju Samson, Ishan Kishan or any other wicketkeeper, whoever is believed to have the potential should be made the wicketkeeper.' 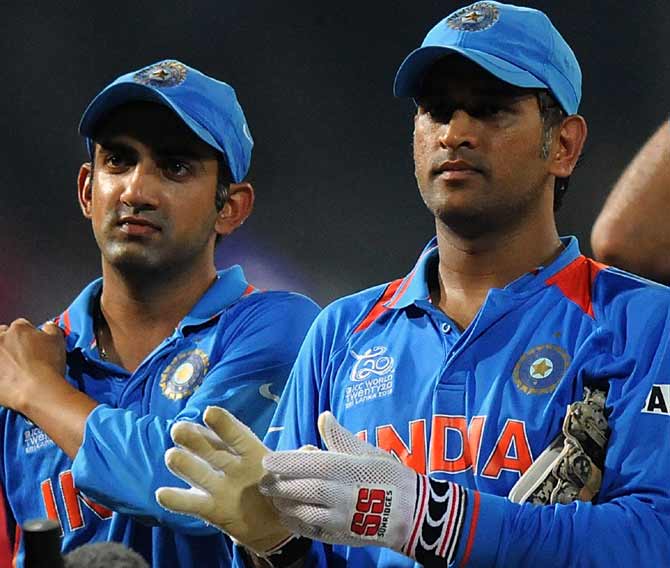 Mahendra Singh Dhoni invested in the future as skipper by demanding younger players and it is now time that 'practical decisions' are taken with regards to him given that youngsters are once again waiting in the wings, said former India opener Gautam Gambhir.

There is intense speculation that Dhoni, who has already retired from the Test format, has played his last ODI for India during the World Cup in which the team was knocked out of the semi-final after a loss to New Zealand.

The selection panel will meet on Sunday to pick squads for the West Indies tour amid intense focus on Dhoni's future and Gambhir said it is time to keep emotions aside.

"It's important to look into the future. And when Dhoni was the skipper, he invested in the future. I remember Dhoni saying in Australia that me, Sachin (Tendulkar) and (Virender) Sehwag can't play the CB series together as the grounds were big," Gambhir was quoted as saying in TV9 Bharatvarsh.

"He wished for young players for the World Cup. It's necessary to take practical decisions than being emotional. And it's time to groom the youngsters. Be it Rishabh Pant, Sanju Samson, Ishan Kishan or any other wicketkeeper, whoever is believed to have the potential should be made the wicketkeeper," he said.

Gambhir unless the younger lot gets enough chances, they won't be able to deliver for India.

"Give him chances for one and half-years and if he doesn't perform, then others should be tried out as well. Then one would get to know who the keeper for the next World Cup is," the 37-year-old said.

The cricketer-turned-politician hailed Dhoni as one of the best captains but said it is unfair to give all credit to him for India's success and also slam him when the team fails to perform.

"If you see the statistics, then he (Dhoni) is the best captain. But that doesn't mean that other captains have done badly. Sourav Ganguly has done good captaincy; we have won outside under him. Under Virat Kohli's captaincy, we have won ODI series in South Africa and Test series in Australia," Gambhir said.

"It is true that MS Dhoni has won us two World Cups (2007 and 2011) but it is not fair to give all credit to the captain for success and criticise only him when it doesn't go your way.

"Dhoni has won the Champions Trophy and World Cups but other captains have also taken India forward. Captains like Anil Kumble have done the job though not for long; Rahul Dravid also led India to win in England."