'For someone who loves the game so much, what better it can be to come and play the game' 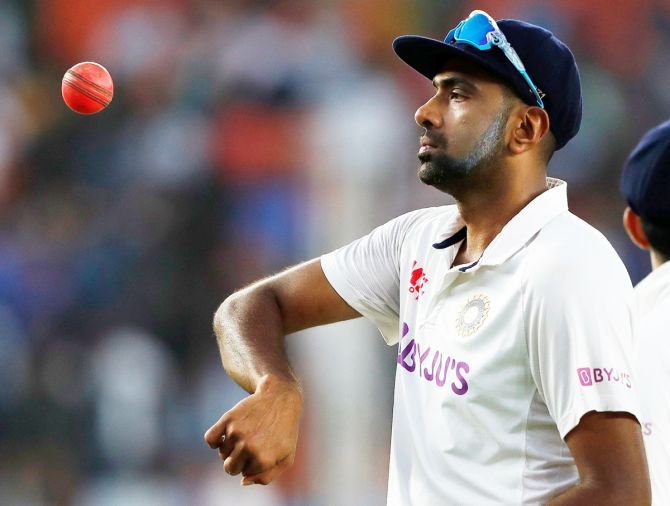 IMAGE: Ravichandran Ashwin said he is a cricket lover who actually went on to become a cricketer. Photograph: BCCI

Called a modern day legend by his captain Virat Kohli, ace Indian off-spinner Ravichandran Ashwin says he is actually an accidental cricketer, who is living a dream with over 400 Test wickets under his belt.

Ashwin reached the milestone in the day-night third Test against England, which ended in Ahmedabad, on Thursday with India winning by 10 wickets inside two days. Ashwin picked up 7 in the match to take his overall tally to 401.

"I accidentally became a cricketer. I am actually a cricket lover who went on to become a cricketer. I am living my dream here, I never imagined that I will wear the Indian jersey one day and I will play," Ashwin told bcci.tv in an interview but did not elaborate on the remark.

According to Ashwin, being in the COVID-19 lockdown made him realise just how lucky he was to play for India.

"And every time I finish playing a game and if I give that winning result for the team, I just feel I am being given a blessing, but the COVID times made me feel how lucky I am to actually play for India."

"Even when I came back after the IPL, I never thought I will play in Australia, so that is what I said, everything has been a gift, for the love with which I play the game, the game is giving me back enough and more laurels," he added.

Ashwin, who also became the second fastest bowler to reach the 400 Test wicket-mark after Sri Lankan spin legend Muttiah Muralitharan, said that he watched a lot of old videos of great individual performances in the lock-down helped improve his understanding of the game.

"I used to watch a lot of footage even before, but the understanding of the game has gone one notch higher...during the lockdown, I was watching a lot of cricket from the past, especially Sachin's (Tendulkar) hundred in Chepauk, all sort of stuff on Youtube," recalled the 34-year-old Chennai-born player.

Jofra Archer became Ashwin's 400th wicket during the second day of the third Test in Ahmedabad, which India won by 10 wickets and he said it was only when the batsman had opted for DRS, he realised that he had reached the landmark.

"Initial feeling is quite empty to be honest, because we were under immense pressure...for me I was actually in the moment, only after he (Archer) had taken the DRS, I realised the 400th that happened," he said.

"...after they flashed 400 Test wickets on the board, the entire stadium was up, everybody was clapping, I don't know, I cannot put a finger and say how I feel about it, the last three months have been a complete fairy-tale," he added.