'It's only three hours so it's going to be easy. There maybe scratchy eyes, sore throat but that's okay. No one is dying.' 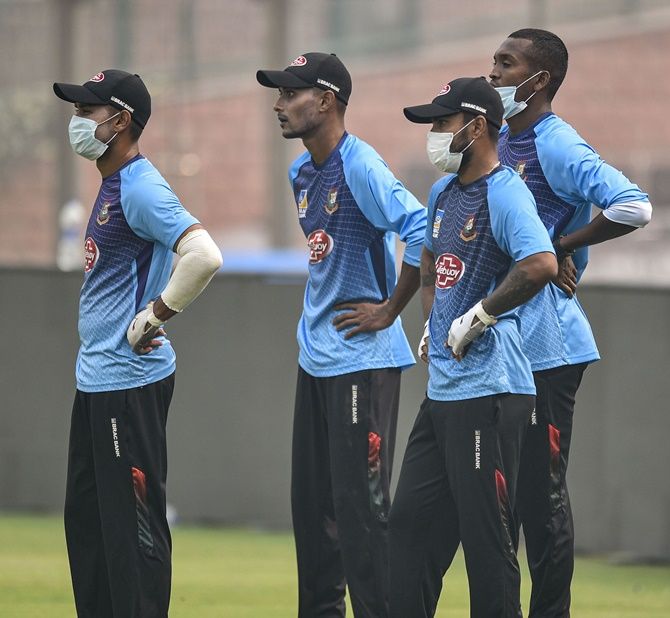 IMAGE: Bangladeshi cricketers, wearing masks to protect themselves from air-pollution, during a practice session at Arun Jaitley Stadium in New Delhi on Friday. Photograph: PTI

Delhi's air pollution has left several Bangladesh players with sore throats and itchy eyes but coach Russell Domingo dismissed any health concerns and said they are focused on giving a good account of themselves in Sunday's first Twenty20 International against India at the Arun Jaitley stadium.

The city government instructed schools in Delhi on Friday to remain shut until November 5 as residents breathed the season's worst air for a third straight day.

Several Bangladesh players and support staff wore face masks during Friday's training session and Domingo said it is not ideal but the tourists would not make an issue out of it.

"Not obviously perfect with the smog but it's the same for both the teams," the South African told reporters.

"It's not perfect, it's not ideal, but it's nothing we're going to complain about and moan over. We just got to get on with it...

"For sure we have some scratchy eyes, maybe a little sore throats now and then, but it's been okay. Nobody is being sick or dying or anything like that."

Delhi's notorious smog caused Sri Lankan bowler Suranga Lakmal to vomit on the field during a 2017 Tests at Kotla and prompted questions about scheduling matches in northern India during winter.

Domingo referred to Bangladesh's own struggle with air pollution and said the team are not taking any special precaution.

"We know Sri Lanka struggled a bit last time. There's bit of pollution in Bangladesh as well. So it's not a massive shock to the system," Domingo said.

India's batting coach Vikram Rathour was rather dismissive about it.

"You are asking the wrong person I think," said the former player from Punjab.

"I have played all my life in north India. We are used to these conditions. We are not taking any special measure. The game has been scheduled and we're here to play."

More than air quality, the tourists are struggling to cope with the absence of talismanic all-rounder Shakib Al Hasan, who was banned earlier this week for an anti-corruption breach.

"Anybody will miss Shakib...but he made a mistake and is paying the price for it," Domingo said.

Shakib's absence has left the coach with a selection dilemma, though he expected youngsters to step up.

"It's very tricky because Shakib bats at number three and often opens the bowling or bowls first change," Domingo said.

"I don't think there is anyone earmarked to specifically do Shakib's job."