The secret behind Delhi pacer Nortje's success in IPL

'I think if you bowl a good line and length there is a lot offered by the wicket and you don't need to do too many things. I think we just try to keep it as simple as possible.' His Delhi Capitals pace partner Kagiso Rabada might be sitting on top of the wicket-takers' list, but Anrich Nortje has undoubtedly been one of the standout performers with the ball in the 13th edition of the Indian Premier League.

Nortje's impact with the ball in the death overs including his lethal toe crushing yorkers have made him an integral part of Delhi's smashing start to the IPL, as they sit on top with seven wins from nine games.

The South African, who was called up as the replacement for England's Chris Woakes, has featured in all nine games in which he has picked up 12 wickets at an economy rate of 7.75.

Nortje says the secret to his success has been acclimatising to the conditions, while keeping things simple, even when he comes up world class batsmen like Virat Kohli, Rohit Sharma or AB de Villiers.

"Try and keep it simple. It is not about the players and more about what we need to do and try and focus on the plan. Better the player, more you have to focus. A good length is a good length and then work around our strengths and see where we can beat them and try and get them out. Even to Rohit, a good line and length will be difficult to play as long as we can hit the mark," he told ANI. He also revealed that the bouncer has been one of his key weapons, which he has used to surprise the batsmen.

"It's just something that I use. No point bowling just six full balls every time. You need to push the batsmen and make them aware of what you have whether they get out that ball or next ball but it is a weapon you have to use as a fast bowler. You cannot let them just lunge forward every time, especially in T20 cricket it makes life so much easier," he said.

Even though the wickets in UAE were expected to primarily help spinners, the pace bowlers have also left their mark in the IPL.

But Nortje believes the spin bowlers are slowly coming into the picture as the IPL moves towards the business end.

"I think they are going to play a massive role later in the tournament. Conditions a little bit tough when you hit the good length. In general, I think if you bowl a good line and length there is a lot offered by the wicket and you don't need to do too many things. I think we just try to keep it as simple as possible," he said. 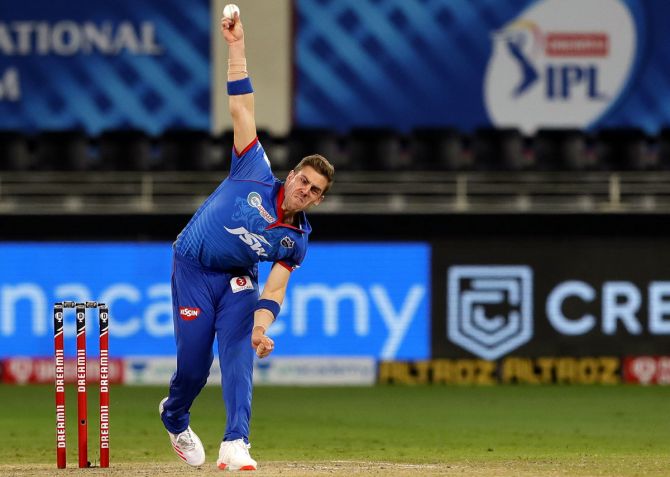 IMAGE: Anrich Nortje has made an impact with the ball in IPL, picking up 12 wickets in nine games at an economy rate of 7.75.. Photograph: BCCI/IPL

Nortje said it has been fun being part of the Delhi Capitals squad this season featuring quite a few young players.

"On the field, we try and bounce ideas off one another but off the field, we speak a lot of nonsense and have fun. In general, we have some good banter. Nice having a young team. Lot of 24-26 year-olds. Really nice being around the group. There is a lot of experience as well even though it is a young group. Everyone is from a different condition and background so just try and see how everyone goes about it. Ricky (Ponting) is also pretty good and calls a spade a spade. Not a lot of cliches are used," he smiled.

Talking about the saliva ban, Nortje says it hasn't impacted him as much but the change of balls has at times affected his bowling during the IPL.

"I am not one to get a lot of swing, so not really for me. I think the ball getting replaced can be a good thing and a bad thing rather than the saliva. Sometimes we can get used to a ball and then it goes for a six and we get a new one and sometimes it might be harder or softer and that can have an impact on the game. But the saliva hasn't been so much of an impact for me," he said.