IMAGE: Fourth Umpire Claire Polosak, left, the first lady umpire to officiate in a men's Test match on day one of the third Test between Australia and India at the Sydney Cricket Ground, January 7, 2020.
With her are Match Referee and cricket legend David Boon, right, and Umpire Paul Wilson, centre. Photograph: Ryan Pierse/Getty Images

Australia's Claire Polosak created history as she became the first lady match official in a men's Test match, taking up the fourth umpire's role in the third Test between India and Australia in Sydney.

Paul Reiffel and Paul Wilson are the two on-field umpires for the SCG Test while Bruce Oxenford is the TV umpire.

Polosak, 32, from New South Wales's Goulburn city has already earned the distinction of being the first woman on-field umpire in a men's ODI match in a ICC Division 2 league game between Namibia and Oman played at the Windhoek in 2019.

She was also the first lady match official in a men's List A game in Australia in 2017. 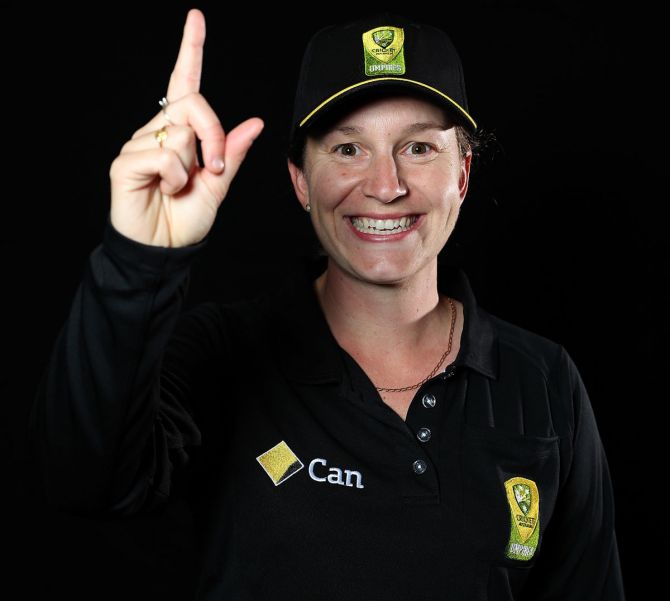 The fourth umpire is appointed by the home cricket board from their nominees to the International Panel of ICC Umpires and from the host country.

The duties of a fourth umpire include bringing on the new ball, carrying drinks on to the field for the umpires, checking the batteries in the light meter, observing the pitch during the lunch and tea intervals to make sure there is no interference, and bringing on new bails.