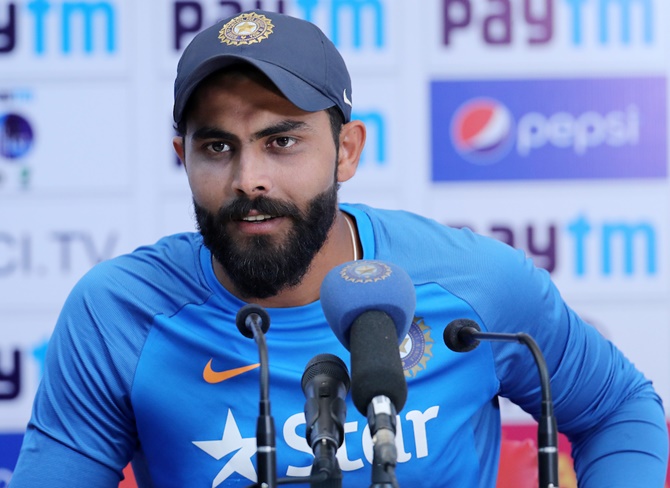 Ravindra Jadeja has endured constant doubts about his Test credentials but the flamboyant all-rounder is convinced he belongs in the longest format of the game after putting India on the verge of a series victory against Australia on Monday.

The 28-year-old made his Test debut in 2012 but has always been labelled as a bits-and-pieces player whose nagging left-arm spin and swashbuckling batting as well as agile fielding were more suited to limited-overs cricket.

But India's current 13-Test home season has seen the emergence of Jadeja the Test player.

The bearded cricketer with tousled hair has stepped out of spin partner Ravichandran Ashwin's shadow and has replaced the off-spinner as the number one Test bowler in the rankings.

Jadeja proved his worth again on Monday, smashing 63 and claiming three wickets to put India on the verge of victory over Australia.

"It feels good to be considered a responsible and valuable member of the side who can contribute - whether it's with his batting, bowling or fielding," Jadeja told reporters at the Himachal Pradesh Cricket Association Stadium.

"Feeling good that I'm doing well in Test cricket. I played many One-dayers and this year I played quite a few Test matches and did well, which gives me a lot of satisfaction. I consider myself suitable for both the formats.

"It gives me confidence that I can play and do well in the long version."

Australia fast bowler Pat Cummins treated Jadeja to a barrage of bouncers on a lively track.

"It was a tough situation as the ball was seaming and bouncing and their fast bowlers were bowling 140 (kmph) plus, he said.

"Today I realised that what exactly people mean when they talk about challenges of Test cricket."

Jadeja's bowling has been a revelation this season and his 25-wicket tally means the spinner is likely to finish as the highest wicket-taker in the series.

Asked about the secret behind his bowling success, Jadeja said, "Well, my shoulder is now on auto-mode. Everything is happening automatically."

Jadeja celebrated his second successive fifty with his trademark twirling of the bat held like a sword.

"You'd be seeing it again and again," added the all-rounder.

© Copyright 2022 Reuters Limited. All rights reserved. Republication or redistribution of Reuters content, including by framing or similar means, is expressly prohibited without the prior written consent of Reuters. Reuters shall not be liable for any errors or delays in the content, or for any actions taken in reliance thereon.
Related News: Ravindra Jadeja, Ravichandran Ashwin, Himachal Pradesh Cricket Association Stadium, Australia, India
COMMENT
Print this article