David Hussey halted a middle-order collapse and guided Australia to a four-wicket victory over England in the third One-day International at the Sydney Cricket Ground on Sunday.

Hussey's 68 not out helped Australia to reach 215-6 and a 3-0 lead in the best-of-seven series, after it had appeared they would fail to achieve the target when Paul Collingwood captured two quick wickets to leave Australia floundering at 100-5.

The 33-year-old Hussey, younger brother of injured batsman Mike Hussey, steadied the innings with Steve Smith (26) and then John Hastings (18 not out), who cut Chris Tremlett to Ajmal Shahzad at deep backward point for the two runs needed for the win.

"I think with injury concerns with Michael Hussey and also Ricky (Ponting) he's going to play a big role for us throughout the World Cup...he's probably going to bat (at) five or six and be that finisher."

Brad Haddin had held the top of the innings together with an aggressive 54, though the other top-five batsmen failed to make it into double figures. 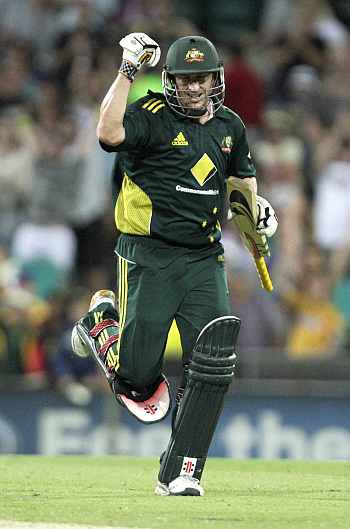 Jonathan Trott (84 not out) had anchored England's score of 214, though he failed to take advantage of the powerplay in the final overs when he was batting with the tail and seemed content to push for singles rather than chance his arm despite only three players being allowed outside the fielding circle.

England were again guilty of failing to bat out their full complement of overs. Chris Tremlett (1) was run out on the final ball of the 48th over when he failed to ground his bat, which denied Trott the possibility of a last flurry.

Trott shared in a 57-run partnership with Eoin Morgan (30) and 49 runs with Luke Wright (32) but too many of England's batsmen threw their wickets away with loose shots.

"Two hundred and 15 is not enough on a wicket like that," England skipper Andrew Strauss rued.

"Jonathan Trott did a good anchor job for us but he needed someone to play and develop a partnership at the other end. Too many of us got to 20 or 30 and didn't go on," he added.

Brett Lee took three for 27 off eight overs and was a constant menace throughout the England innings, earning the man-of-the match award.

© Copyright 2021 Reuters Limited. All rights reserved. Republication or redistribution of Reuters content, including by framing or similar means, is expressly prohibited without the prior written consent of Reuters. Reuters shall not be liable for any errors or delays in the content, or for any actions taken in reliance thereon.
Related News: David Hussey, Jonathan Trott, Sydney Cricket Ground, England, Chris Tremlett
SHARE THIS STORYCOMMENT
Print this article