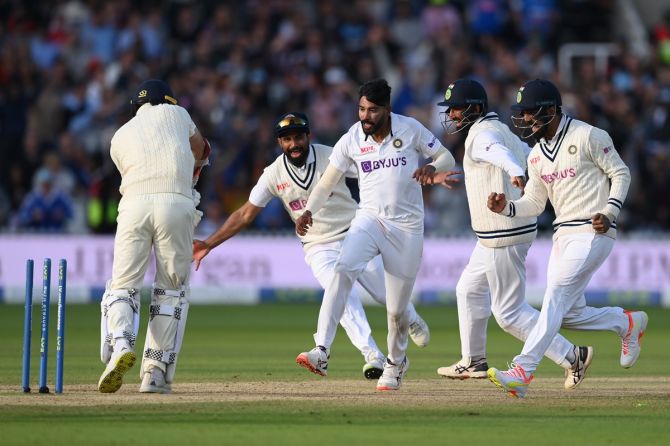 An altercation between England’s players and tail-enders Mohammed Shami and Jasprit Bumrah spurred India during the 60 available overs on the final day of the second Test, according to captain Virat Kohli.

The visitors eventually got the job done in 51.5 overs as their pacers producing a high quality show to dismiss England for 120 and win by 151 runs.

"Super proud of the whole team. The way we stuck to our plans after being put in. The pitch didn't offer much in the first three days. First day was the most challenging," said Kohli, at the post-match presentation, at Lord’s, on Monday.

"The way we played in the second innings after being put under pressure - Jasprit and Shami were outstanding. We had the belief we can get them out in 60 overs. The tension in the field in our second innings, what happened there, helped us," Kohli, who had sledged Ollie Robinson during the fag end of the second innings, said.

India set England a 272-run target following an 89-run stand between tail-enders Jasprit Bumrah and Mohammad Shami. The duo's special was applauded by the entire team, which came down from the dressing room to welcome them.

"Putting their hand up was something we were really proud of and we wanted to let them know (standing ovation for Bumrah-Shami). Batting coach has worked really hard with the boys.

"They have the desire in them to do well for the team. We know how priceless those runs are. The belief (from lower-order) was missing for a while, but now it is back," said Kohli.

It was India's third Test win at Lord's and Kohli called it a special one.

"Have been a part of the winning Test last time under MS (Dhoni). That was pretty special. But this one, to get a result in 60 overs is quite special. And especially with someone like (Mohammed) Siraj, playing for the first time at Lord's… and he bowled superbly.

"We decided 60 is our mark. Crucial breakthroughs with the new ball was the right start for us. Very happy with the support (crowd) we got," he added.

England skipper Joe Root admitted they got their tactics wrong when Shami and Bumrah were batting.

“We went from a very strong position where we looked like we would win the game to losing. More than anything, just got a few things wrong. That partnership, they did pretty well. But lots of things I'd do differently if given an opportunity."

On the positives, Root added: "His attitude (Mark Wood), the way he goes about things.. Mo's (Moeen Ali) come back well. There are things we can take from this game. We're used to playing five-match series.

"Important not to panic and stay calm. So good to have the crowds back to sporting arenas in general," said Root.

K L Rahul got his name on the honours board with a sublime hundred and was the player of the match.

"I've been looking at it every morning to see if they've put it on permanently. They haven't - it's still a temporary piece of paper (name on the honours boards)," said Rahul.

"To put on 360 on the board was really crucial, very happy. Been here for a couple of months now and been working really hard on our skills.

"Even in the first game at Trent Bridge the batsmen have shown a lot of discipline."

With the game headed for a tense finish, words were exchanged on the field regularly.

"That's what you expect with two competitive teams - great skills, and a few words as well. We don't mind some banter. You go after one of our guys and all XI of us will come back," added Rahul.