'Tendulkar is the Amitabh Bachchan of cricket'

I became his fan when I played with him years ago. I was in college and a member of Goregaon Sports Club, Mumbai. We had gone to Shivaji Park for a match with another club, but our match was postponed. 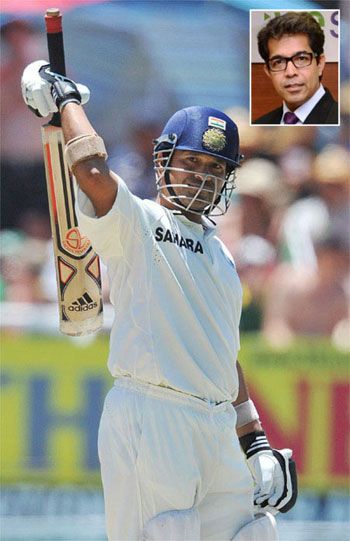 We saw him playing with his team there. We asked them and they agreed to a friendly match. Till that day I was considered a good bowler in my team. He hammered me all over the place.

I watch every match of his. If it is in Mumbai, I always go to the stadium. If it is elsewhere I watch it on television. I always switch off the TV once he gets out. I am his fan and not a team fan.

Whenever we are chasing a total I always feel we have a chance as long as Sachin is at the crease. This is irrespective of how many runs we need. There was no target that he could not reach, as far as the hope I had on him. I expected him to get every total set by any team anywhere in the world. Nothing was beyond him as far as I was concerned.

Among my prized possessions is a T-shirt signed by him. I am glad that he chose when to retire and is doing it as gracefully as he does everything else. Many people felt that he should have resigned earlier to give others a chance.

But who is that other that will replace him? I cannot see anyone who comes anywhere close to what he has achieved. He is the Amitabh Bachchan of cricket. Can anyone measure up to what Amitabh Bachchan has done in movies? No one can! And it is the same with cricket. No one will ever achieve what he has done. Not in our lifetime, at least.

He was not a giant in India alone. Even in world cricket he is the biggest of them all. He is respected in every cricket-playing country.