India opener Mayank Agarwal, who scored 150 and 62 in the second Test against New Zealand, is now looking forward to the challenge of South Africa. 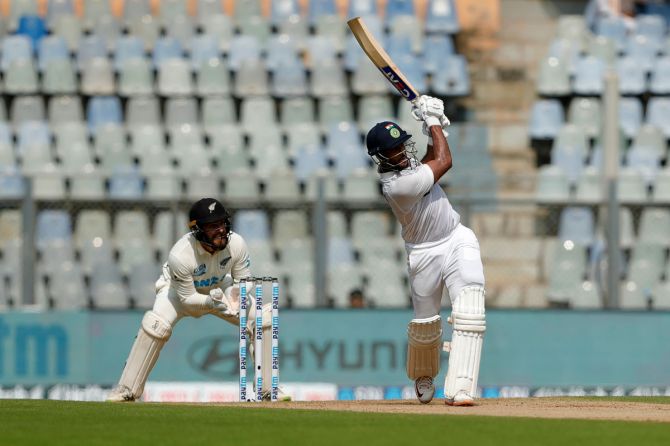 IMAGE: India opener Mayank Agarwal bats during the course of his century in the first innings of the second Test against New Zealand, at the Wankhede stadium, in Mumbai. Photograph: BCCI

After playing a huge role in India's massive win over New Zealand in the second Test, opener Mayank Agarwal said technique does not always guarantee runs, but the determination to fight is key to a good performance.

Agarwal produced a 150-run knock in the first innings and followed that up with a 62-run innings to be adjudged player of the match.

"It feels good to be back among the runs and this knock is special for me. I didn't change anything from Kanpur, I just had the mental discipline and determination," Agarwal said after India's series-clinching win in Mumbai.

"The technique isn't going to be the best all the time; it won't guarantee runs, but the will to fight is key."

The 30-year-old batter said he was not really thinking of a century in each innings, but should have converted the 60 into a three-figure score.

“It will be a different challenge in South Africa; we will relish as a team. We're looking forward to that."

Agarwal, who was out for 13 and 17 in the first Test in Kanpur, said Dravid had told him not to change his technique.

"Rahulbhai told me there's no point thinking about technique mid-series. 'This is the technique that has got you runs, have a solid mindset, stick to your game plans, the runs will come'."

Regarding the advice given by Gavasakar, he said, "Sunny sir told me to keep my bat low early on, be more side-on and open up my left shoulder... it helped."

Senior India off-spinner Ravichandran Ashwin said he enjoyed watching Kiwi left-arm spinner Ajaz Patel create history by taking all 10 opposition wickets in the second match but felt it was his "destiny" to come up with the performance.

"It was a wonderful performance by Ajaz. It doesn't spin all the time in Wankhede, and he used the seam and put the ball in the right places. I enjoyed watching him bowl. It was destiny, said Ashwin, who was named the Player of the Series for taking 14 wickets in the two Tests.

“I think I've got 10 (Player of the Series awards now). I enjoyed Wankhede honestly, and everyday there was something new, and I could challenge both edges."

"I would look to play a part in South Africa and finish off with a series win. We haven't done that before, and hopefully we can do it this time."

Talking about his spin colleague Jayant Yadav, who took five wickets in the second Test here, Ashwin said, "We have trained together, he flew to Chennai from Haryana in 2014 to pick my mind, so we have a good relation."

"Axar, I've been playing for a while at Kings and Delhi Capitals."