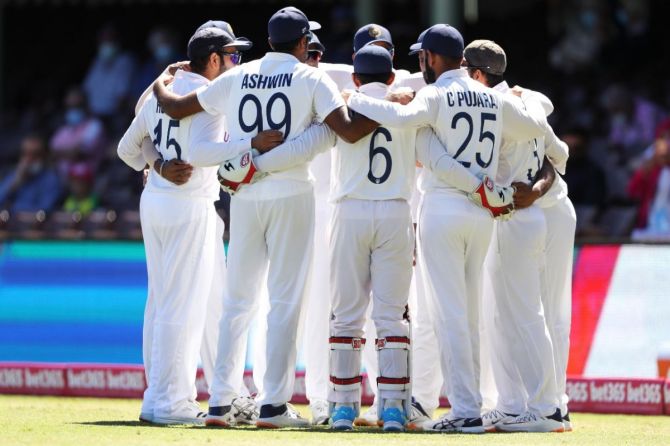 IMAGE: The Indian cricket team sent their grievances to the BCCI top brass who in turn asked CA to act on the complaints. Photograph: Cheteshwar Pujara/Twitter

The Indian cricket team, which landed in Brisbane for the fourth and final Test against Australia, was in for a shock on Tuesday as it was lodged at a hotel which "lacked basic facilities", prompting an intervention from the BCCI top brass.

It is learnt that BCCI president Sourav Ganguly, secretary Jay Shah and CEO Hemang Amin have all got in touch with their Cricket Australia counterparts after complaints reached them. They have been assured that the Indian contingent will be made to feel comfortable from here on. The series is tied 1-1 currently.

"There was no room service or house-keeping facilities. The gym is very basic and not of international standards and the swimming pool can't be accessed. This wasn't what they were promised when they checked in," a senior BCCI source told PTI on conditions of anonymity.

India will be playing the fourth Test in the Queensland capital from January 15 where the surge of COVID-19 cases and a border lockdown with New South Wales has led to a strict hotel quarantine for the Ajinkya Rahane-led team.

Asked if the players were being allowed to mingle, the Board source said: "Yes, they have been provided with a team room and are allowed to meet each other inside the hotel."

When asked whether the team had protested with the hotel authorities, the source said: "When the manager enquired about how these things are not being taken care of, all they said was, 'the rule applies to both Indian and Australian teams. There is no one team that has been subjected to hard quarantine rules.'

However, the Indian contingent is confident that both Ganguly and Shah will be able to amicably resolve the matter as the injury-ravaged team prepares for the series-decider.

Australia had won the opener in Adelaide inside three days, before India came back to clinch the second Test in Melbourne.

The two sides shared the honours in an engrossing third Test in which India produced a gutsy performance in pursuit of a mammoth 407.