'The seamers have actually done a reasonable job with a lot of cutters and banging away into the wickets.' 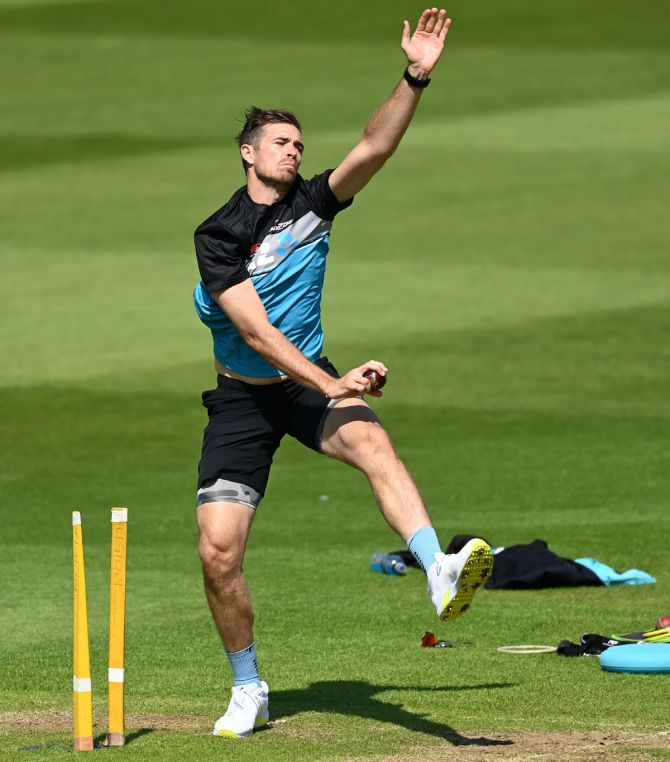 IMAGE: Tim Southee joined the Black Caps squad for his fourth T20 World Cup after playing for KKR during the second leg of the IPL, also in the UAE. Photograph: Gareth Copley/Getty Images

New Zealand's Tim Southee, one of only two quicks in the top 10 of the Twenty20 bowling world rankings, believes sluggish wickets at the World Cup could work out well for seamers.

Southee joined the Black Caps squad for his fourth T20 World Cup at the weekend after playing for the Kolkata Knight Riders during the second leg of the IPL, also in the United Arab Emirates.

"It was a great experience and no better preparation leading into the World Cup here in the same conditions we're going to be faced with," he said.

"The wickets have been slightly different to what you'd usually expect in the UAE, a touch on the slow side. The seamers have actually done a reasonable job with a lot of cutters and banging away into the wickets.

"Encouraging signs for the seamers but with the weather starting to cool down a bit, the wickets I'm sure will improve."

Southee said each of the grounds at Abu Dhabi, Sharjah and Dubai having different characteristics, and there were added variations depending on whether matches are played in the day or at night.

New Zealand will play at all three grounds in their Super 12 group matches, which include clashes with India and Pakistan, but Southee believes the Black Caps have the personnel to deal with the changes.

"A strength of this side is adapting to conditions ... and it's about coming up with a plan that suits our side," he said.

Southee said the shortest international format had changed considerably since his first T20 World Cup in 2010, and not just for swashbuckling batsmen and mystery spinners.

"Seamers (have been) developing different kinds of balls over that time as well," the 32-year-old said.

"When you go back to the start, you'd just have a yorker and a slower ball and sort of bang away at length. Now, you've got so many different types of balls."

New Zealand open their campaign against Pakistan in Sharjah on Oct. 26.