Images from the T20 World Cup Super 12s match between India and New Zealand, in Dubai, on Sunday. 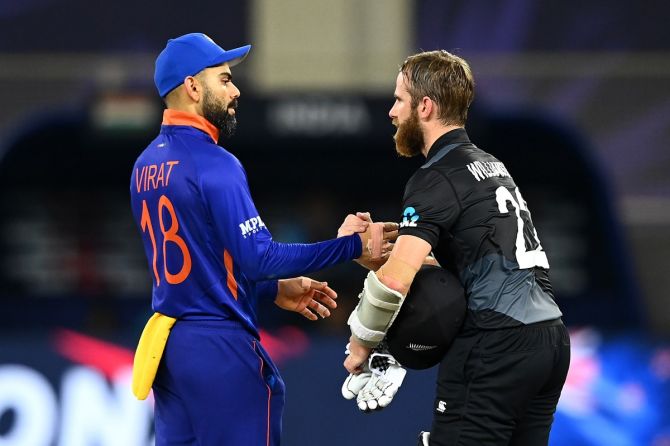 New Zealand thrashed India by eight wickets in the T20 World Cup Super 12s match in Dubai on Sunday, leaving Virat Kohli’s side still searching for their first victory of the tournament.

The Kiwis produced a stunning all-round display after they put India in to bat and dismissed them for a paltry 110.

Set a modest target of 111 in the Group 2 fixture, opener Daryl Mitchell top-scored in a comfortable chase, hitting a quickfire 49, as the Kiwis chased it down with 33 balls to spare. The result means that India will need other games to go their way to make it to the semi-finals.

India now has to beat their remaining opponents -- Afghanistan, Scotland and Namibia -- and hope other results and the net run-rate equation goes smiles on them to make it to the last four stage. New Zealand will be happy with their first points on the board, but Kane Williamson’s side still trail Pakistan and Afghanistan, in that order, at the top of the group.

Martin Guptill got the chase off to a strong start in the Powerplay, hitting all but four of his team’s runs before falling for 20 in the fourth over to Jasprit Bumrah. Mitchell and Williamson then maintained the momentum through the Powerplay, before Mitchell blazed away, eventually falling for 49 off 35 with victory within each.

Williamson scored the winning runs at the end of a classic anchor-innings, finishing with 33 not out off 31 balls and sealing the victory in the 15th over.

While Sunday's defeat to New Zealand reduced India's chances of making it to the semi-finals, it also raised questions on Kohli's abject failure to win an ICC tournament in four attempts as captain. Earlier, India turned in a disappointing performance with the bat and were restricted to a meagre 110 for 7.

Even New Zealand captain Williamson wouldn’t have expected his attack to have India’s famed batting line-up in knots to the extent that they did, with Ravindra Jadeja top-scoring with 26 at the death in a disappointing showing from the pre-tournament favourites.

All five New Zealand bowlers excelled, but it was the spin pair of Mitchell Santner and Ish Sodhi who kept things particularly tight, going for just 32 runs off their combined eight overs, with Sodhi taking the crucial wickets of Rohit Sharma and Virat Kohli.

India made a change at the top of the order from their opening defeat to Pakistan, bringing in Ishan Kishan for Suryakumar Yadav and dropping the rest of the batting line-up down one. But Kishan made little impact, falling to Trent Boult (3 for 20) for just four off eight balls.

The scoring rate was slow as K L Rahul and Rohit Sharma tried to rebuild. But just when they tried to let loose, New Zealand struck.

Rahul holed out to deep square leg off the penultimate ball of the powerplay, and Rohit was gone two overs later, slicing a shot to long-on.

India's fortunes then suffered a huge blow when Virat Kohli was caught on the boundary off the very first ball after the drinks break, leaving India tottering on 48 for 4 after 10.1 overs.

Adam Milne, who was drafted straight into the first eleven after receiving a call-up as an injury replacement for Lockie Ferguson, showed his searing pace to clean up Rishabh Pant. 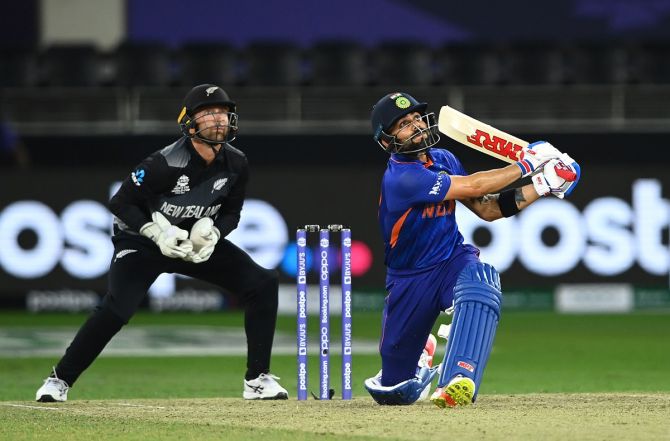 IMAGE: India's captain Virat Kohli goes for a big shot and is caught by Trent Boult (not in picture) near the boundary as New Zealand wicketkeeper Devon Conway watches. Photograph: Alex Davidson/Getty Images

It was an uncharacteristic knock by Pant, who scratched his way to 12 off 19, not managing a single boundary during his stay at the crease, as India limped their way into the death overs needing a big finish to get to a competitive total. Hardik Pandya’s four through backward point off the last delivery of the 17th over was India’s first boundary in 71 balls.

But it was the big-hitting all-rounder’s only boundary of the day, as Trent Boult had him caught in the deep for 23 off 24. Jadeja came in and at least helped India to bring up the hundred, hitting 26 of 19 balls.

He was one of only two batters along with Rahul to score at more than a run-a-ball.

There were just two sixes and ten boundaries in in India's innings, leaving them needing a superb showing from the bowlers to avoid a second straight World Cup loss.