Images from the T20 World Cup match between Bangladesh and Sri Lanka, in Sharjah, on Sunday. IMAGE: Charith Asalanka hit 5 fours and as many sixes in an unbeaten 49-ball 80 to take Sri Lanka past Bangladesh in the ICC men's T20 World Cup match, in Sharjah, on Sunday. Photograph: Alex Davidson/Getty Images

Sri Lanka suffered a mid-innings batting collapse but recovered in time to chase down the target of 172 with seven balls to spare, thanks to brilliant half centuries from Asalanka and Rajapaksa (53 off 31 balls), the duo stitching 86 runs in quick time for the fifth wicket in just 8.4 overs.

The 24-year-old Asalanka, who played just eight ODIs and four T20Is before Sunday's match, held the Sri Lanka innings together, hitting five fours and as many sixes in his entertaining, unbeaten knock.

Coming in the 10th over, the 30-year-old Rajapaksa smashed three fours and as many sixes in his 31-ball innings as Sri Lanka reached 172 for 5 in 18.5 overs. However, Bangladesh would certainly be disappointed with their shoddy out-fielding as Litton Das dropped regulation catches off both Rajapaksa and Asalanka, denying his team a shot at victory.

Bangladesh got the breakthrough with the fourth delivery itself as left-arm spinner Nasum Ahmed got rid of opener Kusal Perera (1), who failed to read a flatter and quicker delivery and was clean bowled.

Despite the early jolt, Sri Lanka were on the ascendant with Asalanka getting the boundaries with ease. He hoisted Nasum for two sixes in the third over and then punished Mahedi Hasan for another maximum to take Sri Lanka to 54 for 1 at the end of powerplay. IMAGE: Sri Lanka's Bhanuka Rajapaksa plays a shot as Nurul Hasan looks on during his 53 off 31 balls, which included 3 fours and as many sixes. Photograph: Alex Davidson/Getty Images

Mohammad Saifuddin then dismissed Wanindu Hasaranga (6) as Sri Lanka lost three wickets in 10 balls for the addition of nine runs.

Sri Lanka were 80 for 4 at the halfway mark and set-batter Asalanka, who reached to his fifty off 32 balls, kept them in the hunt. He was going great guns by hoisting Mahmudullah for two sixes in the 14th over.

Sri Lanka needed 46 from the final five overs but Asalanka and new batsman Rajapaksa decisively titled the balance of the game in their favour. Rajapaksa smacked three sixes in a sensational show of batting pyrotechnics in the 16th over bowled by Saifuddin from which Sri Lanka took 22 runs. 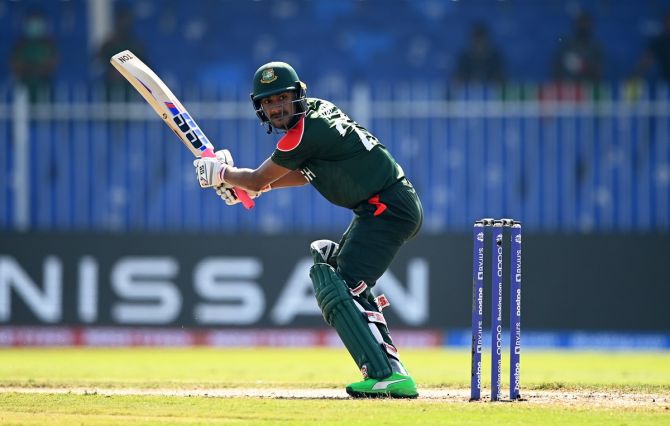 Earlier, opener Mohammad Naim and Mushfiqur Rahim scored impressive half centuries to steer Bangladesh to a competitive 171 for 4.

Joining forces in the eighth over, when the side was struggling at 56 for 2, Naim and Rahim stitched a quick 73-run stand in 8.3 overs to keep the momentum going.

Naim hit six boundaries in his 52-ball 62 while Rahim was unbeaten on 57 off 37 balls, which included 5 fours and 2 sixes. Bangladesh openers Naim and Liton Das waited for a couple of overs before going for big shots. Just when the pair looked good for a substantial partnership Das got out for 16 in sixth over, off the bowling of Lahiru Kumara.

Das made room for himself to drive a fuller delivery over the ring but picked mid-off fielder Dasun Shanaka.

The dismissal led to an ugly scene between the batter and bowler and the umpires had to step in to calm down frayed tempers.

Kumara charged towards Das, who reacted instantly. The duo exchanged a few words, their heads almost butting each other, before they were separated even as some pushing and shoving went on among the players. 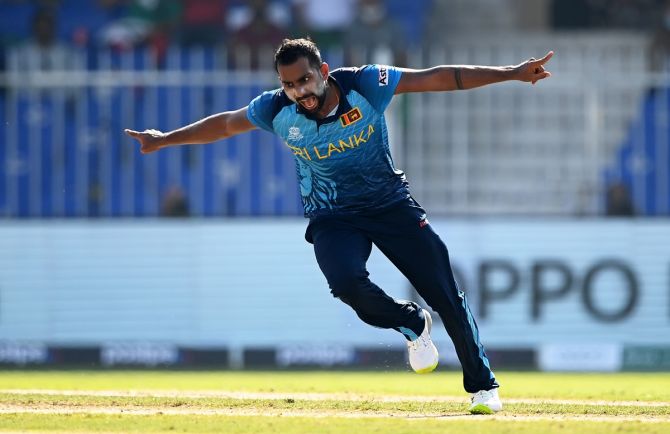 Star all-rounder Shakib Al Hasan (10) was in the thick of things as soon as he came in to bat and hit two fours in the seventh over off Charith Asalanka, but was clean-bowled by Chamika Karunaratne in the next.

From 41 for 1 at the end of the powerplay overs, Bangladesh were 72 for 2 at the halfway mark. The diminutive Rahim was then on song, hitting Wanindu Hasaranga for a six in the 11th over before adding another maximum in the 13th over off Binura Fernando.

The Bangladeshis were beginning to open up their arms and Naim got to his 50 off 44 balls in the 14th over with a four off Lahiru Kumara while Rahim smashed two consecutive boundaries off Hasaranga in the 15th over.

The duo added 46 runs in the five overs after the 10th before Bangladesh mustered another 53 runs from the final five overs.

Naim was out in the 17th over as he mistimed a pull shot for Binura Fernando to take a catch off his own bowling.