Rising Pune Supergiants produced a top notch bowling performance to outwit Royal Challengers Bangalore by 27 runs to get some breathing space in the Indian Premier League, in Bengaluru, on Sunday.

On a slow two-paced track, a total of 161 for 8 by Pune looked challenging enough and they got their bowling combination spot restricting RCB to 134 for 9 in 20 overs.

In the end, Manoj Tiwary's cameo 27 off 11 balls proved to be decisive as he gave Pune a total to fight.

Virat Kohli started with a flicked six off Jaydev Unadkat and a four off Shardul Thakur. But he had a reprieve when Manoj Tiwary dropped a regulation catch a first slip off Thakur. Thakur however had some consolation as he dismissed an out-of-form Mandeep Singh (0) caught by Mahendra Singh Dhoni.

Kohli hit two more boundaries off Thakur looking in ominous touch before a delivery from Ben Stokes climbed big on the skipper. The skier was neatly pouched by Ajinkya Rahane standing a few yards at sweeper boundary.

De Villiers, who started with a six off Unadkat then became a bit cautious as third seamer Dan Christian bowled tight lines in his first two overs. The first 10 produced 66 for RCB with 95 required off back 10. 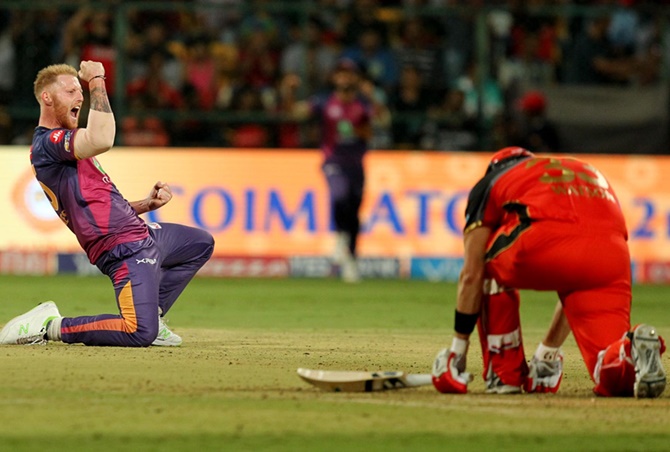 But De Villiers, who had gone into a shell was beaten by a sharp leg-break from Tahir (1/27) as Dhoni whipped the bails off in a flash.

Just like Pune's middle-order collapse, RCB's batsmen also found that ball wasn't coming onto the bat. Jaydev Unadkat's slower delivery saw Kedar Jadhav rushing out only to be played on. Shane Watson (14) was always struggling before being cleaned up by Ben Stokes. It was all over for RCB by then. 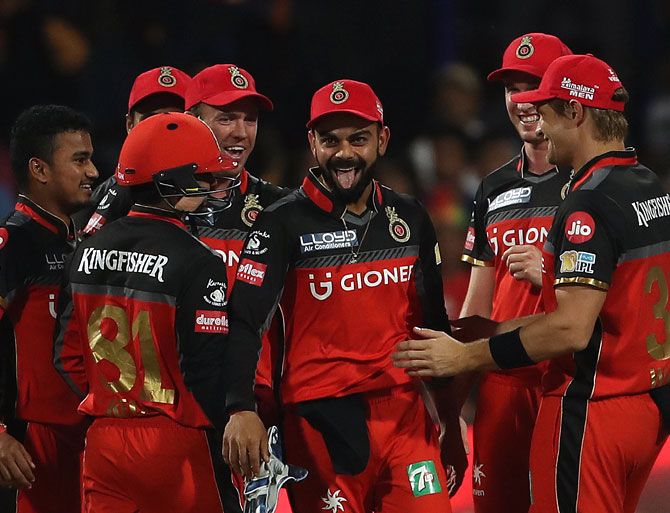 Earlier, Rising Pune Supergiant suffered a shocking middle-order collapse before a Tiwary cameo took them to 161 for 8 against Royal Challengers Bangalore.

It was a below-par score by Pune as they were cruising along at 127 for 2 courtesy 58-run stand between skipper Steve Smith (27) and Dhoni (28) before wickets fell in a clutch.

With addition of only three runs, Pune lost five wickets in a space of nine deliveries with most of the batsmen falling prey to the slowish nature of the track committing to their shots too early. 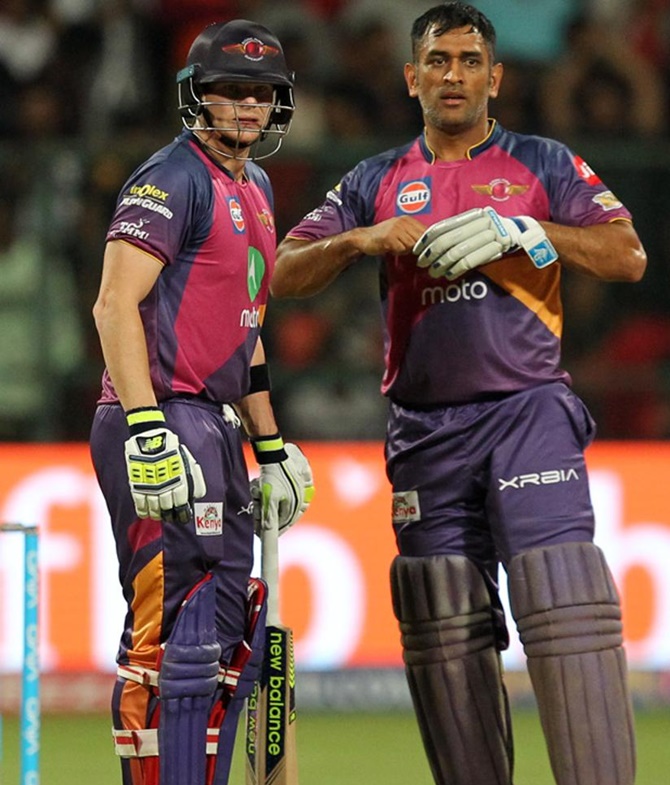 Dhoni and Smith were bowled off successive deliveries while Ben Stokes was also cleaned up.

Tottering at 130 for 7, Tiwary played an absolute cameo scoring 27 off 11 balls including a 19-run penultimate over off Shane Watson that had three boundaries and a straight six into the sight screen.

Had it not been for Tiwary, Pune would have landed woefully short of the target.

Pune started the innings well with Ajinkya Rahane (30 off 25 balls) and Rahul Tripathi (31 off 23 balls) adding 63 for the opening stand.

Rahane hit a flurry of boundaries off the pacers Adam Milne (2/27) and Watson before a googly from Samuel Badree cleaned him up.

Tripathi was gone when drove uppishly with skipper Kohli pulling off an absolute stunner at short extra cover.

Dhoni and Smith joined forces at 69 for two. Dhoni played a couple cut shots behind point to get boundaries.

But his inability to get scoreboard moving was again evident as his 28 came off 25 balls which also had a huge six off Yzvendra Chahal delivery that landed on the Chinnaswamy rooftop.

In fact Dhoni scored 18 runs off boundaries in four balls which effectively meant that the rest of the 10 runs came off 21 deliveries. However just when they were in a position to cut loose, the collapse occurred.