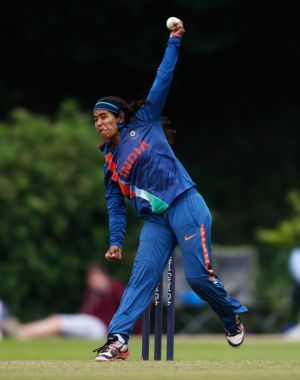 A fine bowling performance by India Women, led by left-arm spinner Gouher Sultana's four-wicket haul, helped the team post a seven-wicket win over Sri Lanka Women in the first ODI of the three-match series in Visakapatnam.

After bundling out Sri Lanka for a meagre 76, Indian eves achieved the target in 32.3 overs, losing three wickets in the process.

Sri Lanka could never overcome those initial jitters and kept on losing wickets at regular intervals to eventually get dismissed for 76 in 39.3 overs.

Yasoda Mendis (17) was the lone batter to reach the double-digit mark.

Although Sri Lanka picked up two more wickets, but their low total never failed to threaten the hosts. They reached 80 for three with 105 balls to spare.

Mithali Raj and Anagha Deshpande (23) put on a 43-run stand together for the third wicket. Mithali finished unbeaten on 34 off 59 balls with six fours.