Steve Waugh back on India tour with 'Spirit of Cricket' 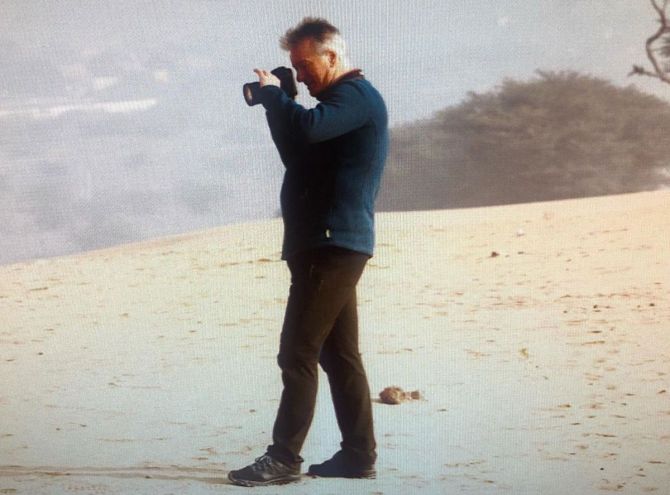 IMAGE: Steve Waugh captures the spirit of cricket in India during his many trips to the country. Photograph: Steve Waugh/Instagram

He played for Australia but captured the cricket of India, in all its kaleidoscopic forms.

While delving deep into the world of cricket in India, Steve Waugh saw the game, which is more a way of life in the country, being played by monks at the foothills of the Himalayas. He saw the sport being played on the beaches, the deserts, the mountains.

The much-admired Australian great was swept off his feet by the sight of a disabled player, being supported by a bamboo on one side, "flying through the air like ninja warriors" while hurling the ball.

He was equally enamoured by dreamy-eyed youngsters playing on the dusty grounds of the famous Azad Maidan in Mumbai.

"This place reeked of cricket and I loved it," Waugh said of the Azad Maidan, according to abc.net.au.

"They're quite amazing, these guys, flying through the air like ninja warriors and landing on these bamboo poles," he said.

The book The Spirit of Cricket – India, by Waugh, contains over 200 photographs captured by the former Australia captain during his many trips to the cricket-mad country.

A collection of over 70 photographs clicked by Waugh will be on display during an exhibition in Sydney at the end of this month.

"The concept of this book was to try and find out why cricket is a religion in India."

Over 18 days and with a camera in hand, Waugh toured across the country, from the streets of Mumbai and Jodhpur, the alleys of Kolkata to the desert in Rajasthan and the Himalayan foothills.

A documentary of his trip, titled Capturing Cricket, will be aired on the ABC on November 17.

Speaking of cricket in the country, he was quoted as saying, "It's hard to overstate the importance of cricket to a country like India.

"There's 800 million people living below the poverty line, but cricket gives them something to connect with.

"It's a sport that doesn't take a lot of money. I mean, I often say about cricket, all you need is a bat and ball."

In a country that loves the game so much, it was difficult for one of Australia's most well-known cricketers to go unrecognised, as he went from one place to another.

"So, straightaway you're recognised, which gives you a connection, and something to talk about. It was a little bit difficult getting some of the shots, because they want to be all around you and swarm around, get a selfie.

"One way I could manage that this time was to promise them a game of cricket after I took the photograph. So, it seemed to work out all OK for everyone."

The India experience reminded him of his childhood as he recalled the hours spent in his garage as a boy, hitting a ball that was tied to the roof.

"I loved the challenge of testing myself," he said.

"Every time I witness kids playing cricket in India, I sense the same love of the game, that pure, unfiltered genuine connection to the sport.

"If you've got a good attitude, if you've got energy, enthusiasm and imagination then it all comes together, and you can get a game with your mates. And that's what happens in India."