India sensationally surrendered to Australia's inexperienced left arm spinner Steven O’Keefe to be bowled out for 105 and concede a big first innings lead on day two of the first Test in Pune on Friday.

India captain and batting mainstay Virat Kohli was despatched for a duck on a wicket favouring both pace and spin.

Mitchell Starc stunned the hosts in the morning by removing Kohli for a second-ball duck through a catch to the slip cordon as he drove away from body.

Kohli was dismissed for a duck for the first time at home and for only the fifth time in his 54-Test career. He had averaged 80 plus by tallying 1457 runs in the last 13 Tests. There has been only one lower total for India at home against Australia. It came at Mumbai Wankhede in 2004-05 when India were bowled out for 104 in a match they won by 13 runs.

Suffered by India – from 94 for three to 105 all out in just 48 balls. This is their worst seven wicket collapse in Test cricket, beating 7 for 18 against New Zealand at Christchurch in 1989-90.

Number of wickets taken by Ravichandran Ashwin in the season 2016/17 – most by any bowler in a home season. Ashwin bettered fellow countryman Kapil Dev’s tally of 63 in 1979/80. Incidentally Ashwin is now second in the list of bowlers with most wickets in a season, behind Dale Steyn, who took 78 wickets in 2007/08 season.

Number of innings taken by Steven Smith to aggregate 1,000 runs against India – fewest by an Australian against India (Matthew Hayden had also taken 14 innings to accomplish this feat). Only three batsmen have reached this mark in fewer innings than Smith from all countries – Everton Weekes (9), Younis Khan (11) and Andy Flower (13).

Number of times India have won a Test after conceding a lead of 150 or more runs. Interestingly both the wins came against Australia – at Melbourne in 1980-81 and Kolkata in 2000-01. 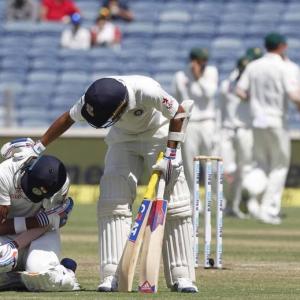 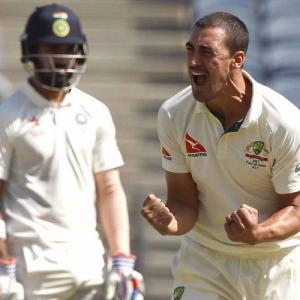