Cheteshwar Pujara compiled an epic double century and Wriddhiman Saha complimented with a career-best 117 to deflate Australia and put India in a strong position. 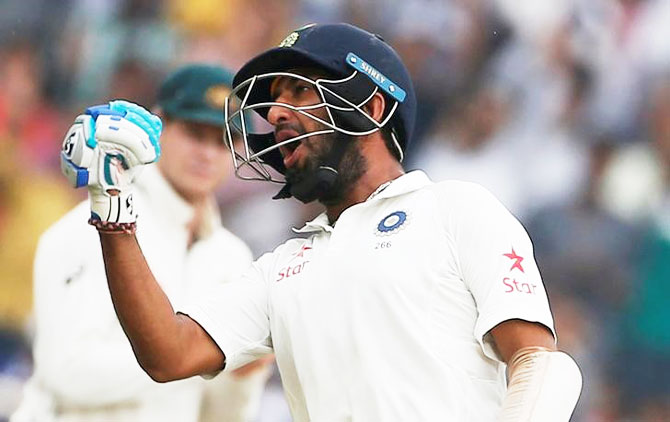 Number of balls faced by Pujara, the most by an Indian in a Test innings. Rahul Dravid set the record in 2004 when he faced 495 balls in his 270 against Pakistan in Rawalpindi, 2004.

The minutes Cheteshwar Pujara’s epic innings lasted for. There have been only three longer innings played by Indians in Test cricket:

The number of Test hundreds made by Wriddhiman Saha. Now only Mahendra Singh Dhoni (6) has made more hundreds than him as a wicketkeeper for India. Saha went ahead of Budhi Kunderan, Farokh Engineer and Syed Kirmani, who each has scored two hundreds.

The partnership between Pujara and Saha, the highest seventh-wicket partnership in Test cricket between the two sides. The previous best was 173 by Andrew Symonds and Brad Hogg at Sydney in 2007-08.

The number of overs bowled  by Stephen O’Keefe, the second most any bowler has ever bowled in a single innings in India after Pakistan’s Haseeb Ahsan’s 84 at Chennai in 1960-61. These are also the most by an Australian since Jim Higgs, who bowled 79.4 overs against England at Sydney in 1978-79.

The number of overs bowled by Australia, the most since 1975, when they bowled 233.5 overs against England at The Oval.

India’s total – their highest at any Indian ground hosting its first Test match.