Cheteshwar Pujara hit an unbeaten century to keep India on course to match Australia's first innings total of 451 in the third Test on Saturday.

Pujara is a steady accumulator of runs in an Indian line-up of mostly flamboyant stroke-makers and his solid defence stood him in great stead as his 11th Test century underlined the virtue of playing along the turf, minimising risks. 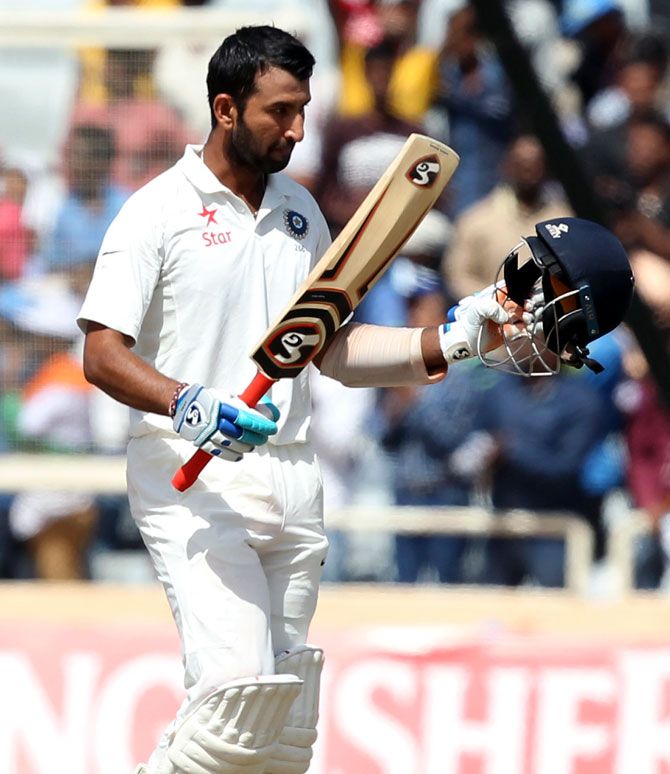 IMAGE: Cheteshwar Pujara is a steady accumulator of runs in an Indian line-up . Photograph: BCCI

Number of times Cheteshwar Pujara has scored a hundred in the inaugural Test match of a venue. He made 101* at Indore (vs New Zealand), 124 at Rajkot (vs England), 119 at Visakhapatnam (vs England)....130* at Ranchi. The only time when he missed out was at Pune (vs Australia).

The average stand between Murali Vijay and Cheteshwar Pujara in 37 innings these two have batted together in Tests, aggregating 2531 runs with 9 century stands. Among all Indian pairs who have aggregated 1,000 or more runs together, only one – Navjot Sidhu and Sachin Tendulkar – has a better average (77.81).

Runs scored by Cheteshwar Pujara in Indian first-class cricket this season – most by any batsman.1187 of these runs have come in Tests. Interestingly Pujara is the only player to aggregate 1500 runs in a season on two occasions. He had also made 1585 runs in 2012-13 season.

Runs conceded by Nathan Lyon since returning the best figures by a visiting bowler in India (8/50 in first innings of Bangalore Test). He had the figures of 0/82 in the second innings at Bangalore and 0/97 at close of play at Ranchi.