Following Rohit Sharma’s fighting half-century, India finished the day on 227-8, taking a massive 339-run lead on Day 3 of the 2nd Test in Kolkata on Sunday. 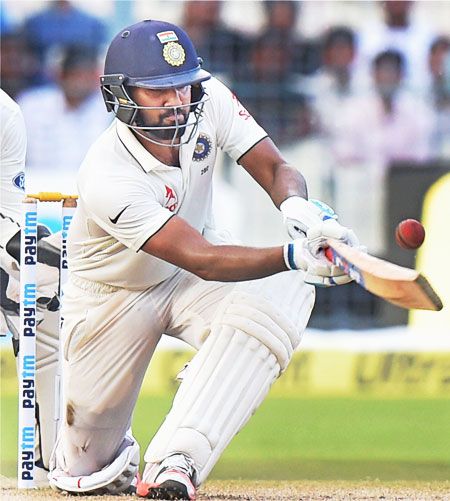 Here are the statistical highlights from the day’s play.

# For the first time, Saha has scored 30-plus in each innings of a Test match.

# Rohit Sharma's second fifty on Indian soil is his sixth in Tests.

# Rohit's knock of 82 off 132 balls is his highest score under Virat Kohli's captaincy.

#Rohit (82) has recorded his highest score -- his third fifty -- vs New Zealand in Tests. His previous highest vs New Zealand was 72 at Auckland in February 2014 -- his other fifty against them being 68 not out at Kanpur in September 2016.

# Rohit's record vs New Zealand is quite impressive – his aggregate being 309 in four Tests at an average of 51.50.

# Virat Kohli (45 off 65 balls) has recorded his highest score as captain vs New Zealand in Tests. The said innings is his highest in the current rubber.

# Since registering 200 vs West Indies at North Sound in July 2016, Virat is without a fifty in seven successive Test innings.

# Jeetan Patel (47 off 47 balls) has recorded his highest score in Tests, eclipsing the 27 not out vs South Africa at Cape Town in April 2006.

# Patel's innings is the highest by New Zealand's number nine batsman at EdenGardens, Kolkata, surpassing the 43 by Graham Vivian in March 1965.

# West Indian batsman, Norbert Phillip (47 in December 1978) and Patel share the highest individual innings by a No. 9 batsman in a Test innings vs India at Eden Gardens.

# 14 fifties have been recorded in the series so far without a century -- the second highest tally in a Test rubber next only to the 18 involving Pakistan and Zimbabwe in Pakistan in 1993-94.

# Rohit and Saha were involved in a 103-run stand India's highest seventh-wicket partnership vs New Zealand at Eden Gardens, Kolkata, beating the 56 between Salim Durani and Mansur Ali Khan Pataudi in March 1965.

# In the last five Tests at EdenGardens, Kolkata, including the present one, four century stands for the seventh wicket have been recorded.

# Mitchell Santner (3/51) has produced his best bowling performance in Tests, surpassing the 3 for 94 vs India at Kanpur last month.

# The Indian fast bowlers have bagged eight wickets (5 by Bhuvneshwar and 3 by Shami) in New Zealand's first innings -- the first such instance for India in Tests vs New Zealand, bettering the 7 (6 by Javagal Srinath and one by Venkatesh Prasad) at Mohali in October 1999).

Image: Rohit Sharma bats during his 82-run knock on Day 3 of the 2nd Test against New Zealand on Sunday