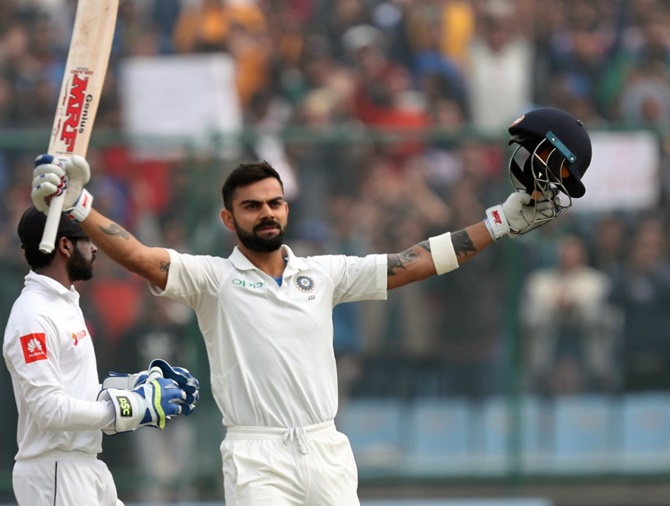 # Virat Kohli's 243 is his highest individual innings in Tests at Feroz Shah Kotla, Delhi, eclipsing New Zealand's Bert Sutcliffe's 230 not out vs India in December 1955. Vinod Kambli's 227 (off 301 balls) in 413 minutes vs Zimbabwe in
March 1993 was the previous highest score by an Indian batsman at this venue.

# Kohli has established a record for the highest individual innings by an Indian captain in Tests, bettering his own 235 vs England at Wankhede Stadium, Mumbai in December 2016.

# Kohli's strike rate of 81.87 in the above rubber is the highest by an Indian skipper in a Test series when atleast 400 runs have been scored. The previous best was registered by Mohammad Azharuddin - 79.47 while scoring 426 runs in three Tests (five innings) at an average of 85.20 vs England in 1990.

# Kohli became the second Indian player after Vinoo Mankad (vs New Zealand in 1955-56) and the 13th in all to post two innings of 200 in the same Test series. Don Bradman had achieved the feat four times, including three innings of 200- plus vs England in 1930.

# Since recording his first double century in 2016 – 200 against West Indies at North Sound, by Kohli, no other skipper has posted even a single double century in Tests. Joe Root's 190 vs South Africa at Lord's in July this year is the highest by any other captain during this period.

# With six double centuries in Tests, Kohli has equalled an Indian record, held by Sachin Tendulkar and Virender Sehwag.

# After their 173-run stand for the fifth wicket vs Sri Lanka at Nagpur, Virat Kohli and Rohit Sharma were associated in a vital stand of 135 for the same wicket in the Delhi Test.

# India have recorded their joint-third highest total at Feroz Shah Kotla - their highest ever at this venue being 613 for seven wickets declared vs Australia in 2008-09.

# Rohit Sharma has posted four consecutive innings of 50-plus for the first time in Tests - 82 at Eden Gardens at Kolkata & 51 not out at Indore - both vs New Zealand in 2016 followed by an unbeaten 102 at Nagpur & 65 at Delhi - both vs
Sri Lanka.

# Rohit's 65 is his third fifty vs Sri Lanka - his eighth in Tests.

# Dimuth Karunaratne has posted his tenth duck in Tests - his third vs India.

# Angelo Matthews' unbeaten 57 is his 29th fifty in Tests - his fifth vs India.

# In nine Tests this year, Matthews has recorded three fifties.