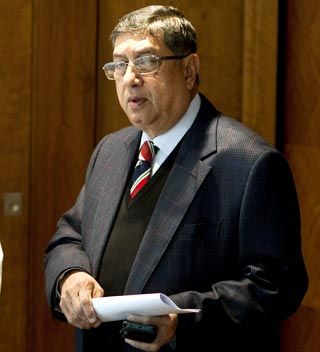 'Any person associated with Indian Cements, the owners of Chennai Super Kings franchise, should not be involved with the BCCI.'

The Supreme Court has suggested that Chennai Super Kings and Rajasthan Royals be barred from the Indian Premier League.

It also proposed that Indian batting legend Sunil Gavaskar should take over from N Srinivasan and be made interim president of the Board of Control for Cricket in India till it announces its final verdict in the matter.

It further said any person associated with Indian Cements, the owners of Chennai Super Kings franchise, should not be involved with the BCCI.

It has given the BCCI a 24-hour deadline to respond to the proposals.

The Supreme Court said it will pass the interim order on the IPL spot-fixing and betting scandal on Friday at 1030 IST.

Earlier on Thursday, the BCCI told the Supreme Court that Srinivasan is ready to step aside as president till the duration of a time bound inquiry into the betting and spot-fixing charges that rocked the sixth edition of the Indian Premier League last year.

The BCCI gave its proposal before the Supreme Court assuring it of initiating disciplinary proceedings in the IPL scandal on the basis of recommendations of the Justice Mudgal committee report.

It also requested that the Court should not restrict Srinivasan from taking over as chairman of International Cricket Council in July.

"Investigation be carried out on the basis of findings of Mudgal committee report," the BCCI told the Supreme Court.

However, the Court replied: 'We will have to think hard for the benefit of cricket and will have to pass order.'

The Supreme Court, on Tuesday, had asked why Srinivasan is sticking to the chair, and gave him 48 hours to quit on his own. It said if he did not, it would pass an order for his removal.

After going through the contents of a report filed in a sealed cover by apex court-appointed probe panel into the scandal, a bench, headed by Justice A K Patnaik, said there are "very very serious" allegations made in the report and unless the BCCI president steps down, no fair probe can be conducted.

Three of five BCCI vice-presidents -- Shivlal Yadav, Ravi Sawant and Chitrak Mitra – have put pressure on Srinivasan to quit, by saying he should honour the Supreme Court's observation.

Srinivasan had stepped aside in June 2013 after his son-in-law Gurunath Meiyappan's name cropped up in the spot-fixing scandal, which led to former India pacer Shantakumaran Sreesanth and his two other Rajasthan Royals colleagues being banned from the game.

In his absence, former BCCI chief Jagmohan Dalmiya discharged the duties of the president.

However, at the BCCI Annual General Meeting in September 2013, Srinivasan was re-elected as president.