'Considering the wickets in Sri Lanka, we've tried to get the balance right'

'Mishra was always in the scheme of things and, if you remember, even last year he was in the reserves'

'Ojha was discussed in the meeting, but, in the end, only 15 can go' 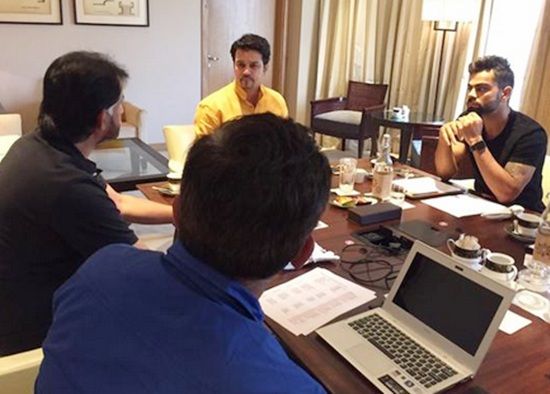 Chairman of selectors Sandeep Patil, Anurag Thakur and Virat Kohli at the selection committee meeting to pick the Test team for the tour of Sri Lanka. Photograph: BCCI/Twitter

When the selectors sat down to pick India's Test squad for the tour of Sri Lanka, they had plenty on their plate.

Should they go out with a pace battery or mix of spinners and pacers?

Who would be the third spinner, what with Axar Patel, Amit Mishra and Pragyan Ojha all knocking on the doors of selection.

In the final analysis, they decided to go with the tried and tested for the three-Test series against the Islanders, starting August 12.

They were partly helped by the fact that some senior players were either injured or woefully out-of-form.

Virat Kohli, who returns to lead the side, will have three specialist spinners and four pacers at his disposal.

'Amit Mishra was always in the scheme of things' 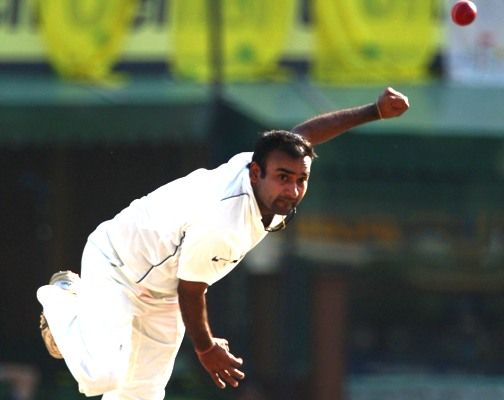 Amit Mishra, who will be making a comeback to the squad after four years, was picked considering the pitches and the Sri Lankans' performance against leg-spinners.

"(Amit) Mishra was always in the scheme of things and, if you remember, even last year he was in the reserves. The final authority or decision of picking him in the final eleven is left to the team management and captain.

"Our job is to give them the best, right combination of 15 players. Why A was not played and B was picked is not what we get into," chief selector Sandeep Patil said after Thursday's selection committee meeting in Delhi.

Asked why Karn Sharma was not considered, he explained: "The policy that selectors have followed all these last three years is that we always have the fitness report prior to the selection committee meeting and (Karn) Sharma has still not recovered from his injury.

"Same is the case with Mohammad Shami. So these two were not discussed in the meeting."

"We've always tried to get the balance right, and considering the wickets in Sri Lanka, I think this is the best possible combination in our bowling department. We all selectors felt that we can go ahead with it."

'The selectors are quite happy with Harbhajan's comeback' 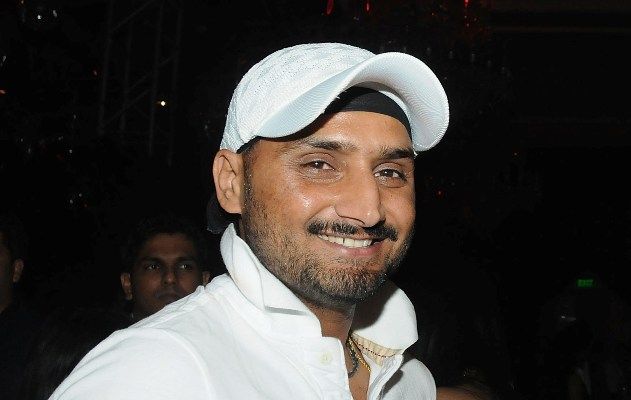 Patil was "quite happy" with Harbhajan Singh's return to form and expressed hope of him continuing the good work in Sri Lanka.

"We are first of all quite happy that Harbhajan has come strong and, as I have said before, it's our job to represent each and every domestic player who plays and performs. Ultimately, it depends on that particular tour, and looking at the fitness and current form then we go into the final selection of picking the final 15.

"The selectors are quite happy with his comeback and now we want this spin attack - that consists of Harbhajan, (Ravichandran) Ashwin and Mishra - to deliver."

Pragyan Ojha's name was also discussed before the selectors opted for Mishra.

Explaining the reasons behind leaving Ojha out of the squad, the 58-year-old Patil said, "Yes, Ojha was discussed in the meeting, but, in the end, only 15 can go.

"So looking at the wickets in Sri Lanka and their performance against the leg-spinners we gave preference to Mishra."

'You cannot replace someone like Dhoni, but Saha is the right choice at this stage' 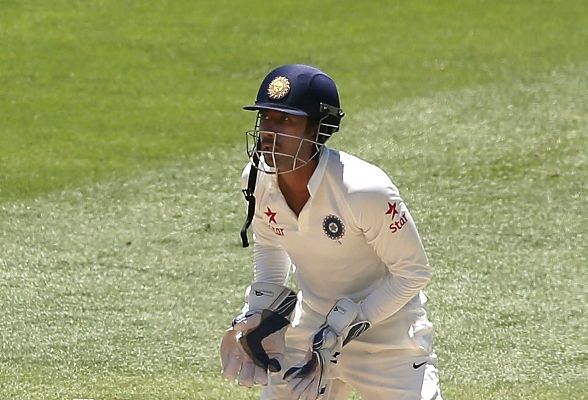 'Wicketkeeper Wriddhiman Saha is the right choice at this stage, especially looking at his ability with the bat as well.' Photograph: Getty Images

Patil also expressed confidence in the ability of wicketkeeper Wriddhiman Saha, who replaced Mahendra Singh Dhoni after his retirement.

"Does he have the technique or not, time will tell. We have backed him looking at his performance in the domestic level.

"You cannot replace someone like MS Dhoni and come in and deliver the results. However, we feel that he is the right choice at this stage, especially looking at his ability with the bat as well."

India is going in with just one wicketkeeper, but Patil clarified that they have a standby should Saha get injured. However, he did not reveal the name of the player.