IMAGE: Oshada Fernando and Kusal Mendis scored fifties on the third morning to help Sri Lanka become the first team from the subcontinent to record a series win in South Africa. Photograph: ICC/Twitter

Oshada Fernando and Kusal Mendis struck unbeaten half-centuries as Sri Lanka claimed a historic eight-wicket win in the second and final Test at St George's Park to become the first Asian side to win a Test series in South Africa.

Prior to the series, Sri Lanka had not won a game in any format since October but comfortably chased down a victory target of 197 on the third day for a 2-0 triumph.

Sri Lanka claimed a thrilling first Test victory in Durban by one wicket and outplayed South Africa in the second, setting up their victory by skittling the hosts for 128 in their second innings on Friday.

Mendis scored 84 and Fernando made 75, putting on an unbroken stand of 163 for the third wicket as they pummelled the much-vaunted South African bowling attack on a wicket that became easier to bat on through the Test.

"It's a great feeling for me and the team. It's not easy when you come to South Africa, so to win the series 2-0 is brilliant," Sri Lanka captain Dimuth Karunaratne said at the post-match presentation.

"It has been a lot of hard work, but the guys did really well and enjoyed it a lot, which is why I think we created history.

"This victory is dedicated to the Sri Lanka fans who have continued to support us because they were always behind us when we were losing. We wanted to do something here for them." 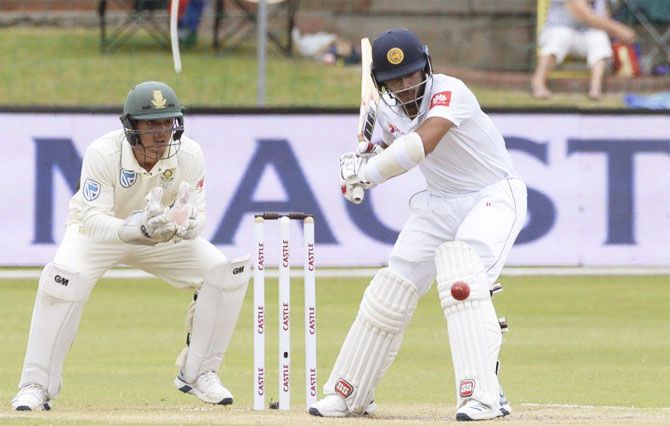 IMAGE: Kusal Mendis was named Man of the Match for his 84 not out. Photograph: Sri Lanka Cricket/Twitter

Sri Lanka had resumed on the third morning on 60 for two, though effectively three down with spinner Lasith Embuldeniya out of the Test with a broken thumb.

As has been the case through the series, Sri Lankan batsmen looked to attack the home bowlers.

Fernando, who made his debut in the series, completed his maiden half-century off 69 balls, providing the perfect foil for the more aggressive Mendis.

Sri Lanka have now won two of their last six Test series, with both those victories coming against South Africa. They defeated the Proteas at home last July.

It marked another key breakthrough for Asian teams after India won a first Test series in Australia earlier in the season, suggesting tours to countries with pacy and bouncy wickets are becoming less daunting.

South Africa, however, witnessed their run of seven consecutive home Test series wins come to an end and captain Faf du Plessis said their misfiring batsmen must shoulder the blame.

"I thought we were poor with the bat throughout the series," Du Plessis said.

"I thought in general through the series both teams probably didn't perform with the bat on two pitches that were very conducive to scoring runs.

"Today for the first time there was a real display of what should have happened in the rest of the series, two guys getting together and scoring some big runs.

"On this wicket we should have scored a lot more runs."