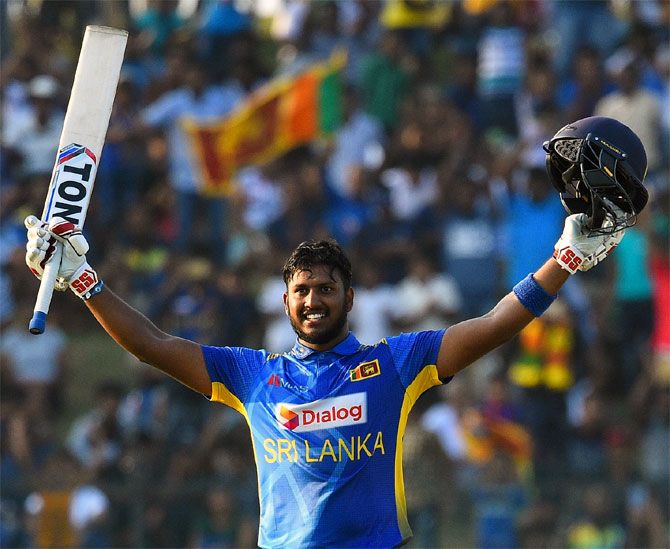 IMAGE: Avishka Fernando celebrates after completing his century during the second ODI against West Indies in Hambantota, on Wednesday. Photograph: Sri Lanka Cricket/Twitter

Avishka Fernando and Kusal Mendis scored centuries as Sri Lanka crushed the West Indies by 161 runs in the second One-Day International, in Hambantota on Wednesday, to clinch the series.

Fernando, who blasted 127, and Mendis, who made 119, put on 239 runs in Sri Lanka's highest third-wicket stand after West Indies won the toss and elected to bowl in their bid to square the three-match series.

Pacer Sheldon Cottrell did not disappoint with twin strikes off successive balls in the fourth over. Skipper Dimuth Karunaratne was out for one and Kusal Perera fell for nought in his 100th ODI before Mendis denied Cottrell a hat-trick and combined with Fernando to thwart the opposition bowling.

Mendis got a reprieve on two when West Indies skipper Kieron Pollard dropped a simple chance at first slip off Jason Holder. He went on to score his second one-day hundred. 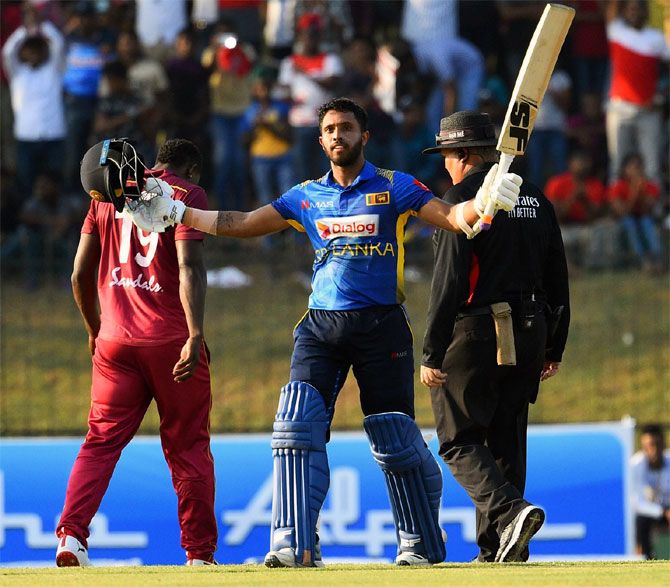 Mendis and Fernando, who hit his career-best ODI score off 123 balls, smashed 22 fours between them.

Fast bowler Alzarri Jospeh finally claimed the centurions in the space of 14 deliveries, and then bowled former captain Angelo Mathews for one.

Cottrell hurt Sri Lanka's middle-order with the wickets of Thisara Perera, for 36, and Dhananjaya de Silva, for 12, to end with figures of 4-67.

Chasing 346 for victory, the West Indies were bowled out for 184 in 39.1 overs, wrist spinners Wanindu Hasaranga and Lakshan Sandakan taking three wickets each.

Sri Lanka took an unbeatable 2-0 lead in the three-match series after edging the first game by one wicket.

The third match is in Kandy on Sunday. 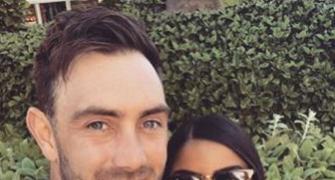 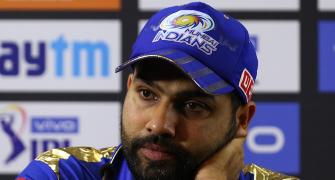 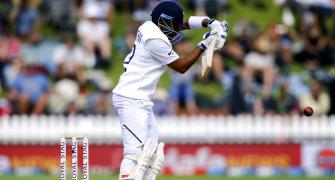 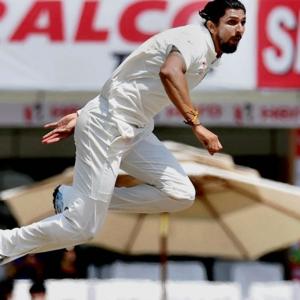