Spotlight on Gill as dominant India 'A' play South Africa 'A' 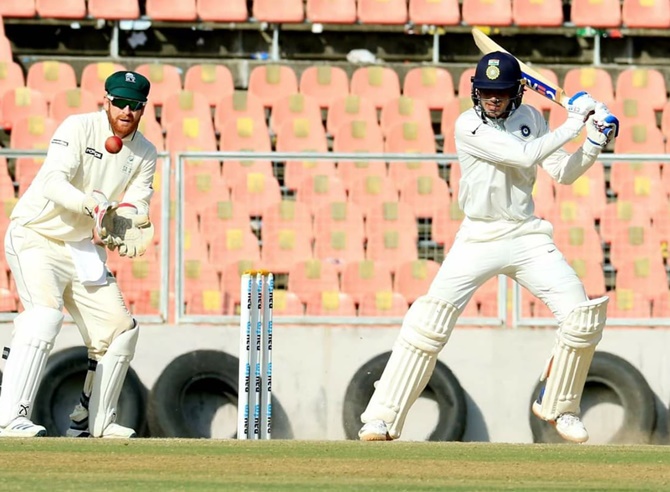 IMAGE: The focus will be on 19-year-old Gill, who has broken into the Indian Test squad. Photograph: Shubhman Gill/Twitter

Young Shubman Gill will be the centre of attraction when a dominant India 'A' lock horns against South Africa 'A' in the second and final unofficial Test of the series, starting, in Mysuru, on Tuesday.

After pocketing the five-match unofficial ODI series 4-1, India 'A' continued their domination over South Africa 'A' in the Test rubber by winning the first game by seven wickets.

And the Indians would look to draw curtains on the series on a perfect note with yet another complete performance.

But the focus will be on 19-year-old Gill, who has broken into the Indian Test squad for the three-match series against the Proteas, starting on October 2 in Visakhapatnam.

Gill, who was captain in the first match, made a superb 90 en route to the comprehensive win.

And the youngster from Punjab would be eager to prove the national selectors right after being named in the Virat Kohli-led Indian Test squad.

In the second four-day game, the national selectors have given opportunities to several performers in the domestic circuit.

Experienced Bengal wicketkeeper Wriddhiman Saha will take over the captaincy from Gill, while openers Priyank Panchal and Abhimanyu Easwaran have also been drafted in.

Both Panchal and Easwaran, who too are knocking on the doors of the senior Test side, will be keen to showcase their potential after Gill leapfrogged them into the five-day team.

Saha was in the reserves on the recent tour of West Indies as Rishab Pant donned the big gloves.

With Pant's keeping skills on Indian wickets yet to be tested in the longest format, Saha would fancy his chances and a good showing here would do him a world of good.

Karnataka batsman Karun Nair, out of favour since the home series against Australia in 2017, is also part of the squad and will hope to score big after some impressive performances in the recent Duleep Trophy tournament.

But it remains to be seen if Tamil Nadu all-rounder Vijay Shankar, who missed the first match due to a thumb injury, gets an opportunity.

Spin trio of Shahbaz Nadeem, Jalaj Saxena and Krishnappa Gowtham did the damage in the Thiruvananthapuram game after pacers Shardul Thakur and Mohammed Siraj had made early inroads into the South Africa 'A' line-up.

Saxena, who plays for Kerala now, impressed with both bat and ball, while Nadeem picked up wickets in both innings.

The home team's bowling attack may witness some changes after experienced Umesh Yadav and chinaman Kuldeep Yadav were drafted into the squad along side Avesh Khan.

After being outplayed in the first unofficial Test at Thiruvananthapuram, the visiting team led by Aiden Markram would hope for an improved show from his players in the final match of the series.

South Africa 'A' have a handful of players who are part of the senior Test squad and they would be hoping for good outing.

The batting unit led by the highly-rated Markram came a cropper in Thiruvananthapuram.

For Markram and others in the Test team -- Theunis de Bruyn, Zubayr Hamza, Heinrich Klaasen, Senuran Muthusamy, Dane Piedt and Lungi Ngidi -- this match presents a chance to prepare for the tough examination that awaits them.