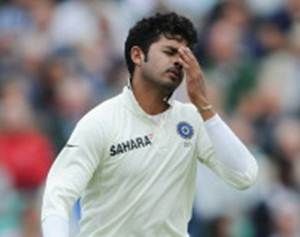 Banned fast bowler Shantakumaran Sreesanth claimed innocence in a letter to the Board of Control for Cricket in India’s disciplinary Committee and said his confession to Police in the spot-fixing saga was under duress.

"Under the threat of arrest of my close relatives a statement was forcibly taken in the manner directed by the police," said Sreesanth, who was banned for life after being found guilty of spot-fixing in the IPL in an internal inquiry conducted by the Board's Anti-Corruption and Security Unit chief Ravi Sawani.

"There is no confession recorded by me willingly to the police. The police have mentally and physically harassed me and obtained signed statements. The conclusion arrived at by the Commissioner of Enquiry that I have committed offences ... is based on conjectures, guesses, inferences, and inadmissible police reports," Sreesanth said, in the letter that was submitted to the Disciplinary Committee just before the hearing.

"The police have not intercepted any conversation between me and any others in support of the wild and fantastic charges levelled against me which has put me into manifest injustice and prejudice as I had no opportunity to refute them," said the 30-year-old pacer.

He said it is too "distressing" for him because there is no concrete evidence against him.

"As regards seeking, accepting, offering or agreeing to accept any bribe there is no trace of evidence pointing out to any such incident at all.

"As regards the charges I respectfully beg to submit that all of them as has been conceded in the report itself are based on media reports and not any concrete and reliable evidence.

"To cut short a cricket life like that solely on the basis of unreliable media reports, suspicions, generalizations, statement by accused etc will be too distressing to bear for me," the Kerala pacer said.

There are allegations that Sreesanth had given away 14 runs during an IPL 6 match and he had signalled to bookies by tucking a towel in his trousers and stretching before the over.

However, Sreesanth refuted all these allegations, saying it was a normal practice to use a towel or warming up before an over.

"It is not uncommon to use a towel in afternoon matches particularly in a place like Mohali in the month of April-May. Enough photographs are there to show that in many of the earlier matches I played, white colour towel had been used by me," he wrote in his letter.

"What is alleged as warming up against me is not really warming up but a manner of play which I did in other plays also. Conceding of 14 runs, I may respectfully point out that there was no guarantee that the captain will ask me to bowl in a particular over," he added.