IMAGE: Shoaib Akhtar hugs Sachin as another legendary speedster Glenn McGrath is much amused by the affection between the old adversaries. Photograph: Mohammad Jaffer/SnapsIndia

Akhtar, who is part of Sachin's Blasters in the ongoing T20 event in the US, told some Pakistani journalists in Houston that he was hopeful that one day the cricket extravaganza would be held in Pakistan.

"I have had a word with Sachin (Tendulkar) on the possibility of the all-stars series in Pakistan one day. Sachin was happy and expressed willingness to materialise this idea," he said.

Three T20 matches are part of the All-Stars event with the first match being played in New York last Sunday before a crowd of around 36,000 fans.

The second match is scheduled at the Minute-Maid park in Houston where the former stars, who make up the two teams led
by Tendulkar and Shane Warne, have been having nets. 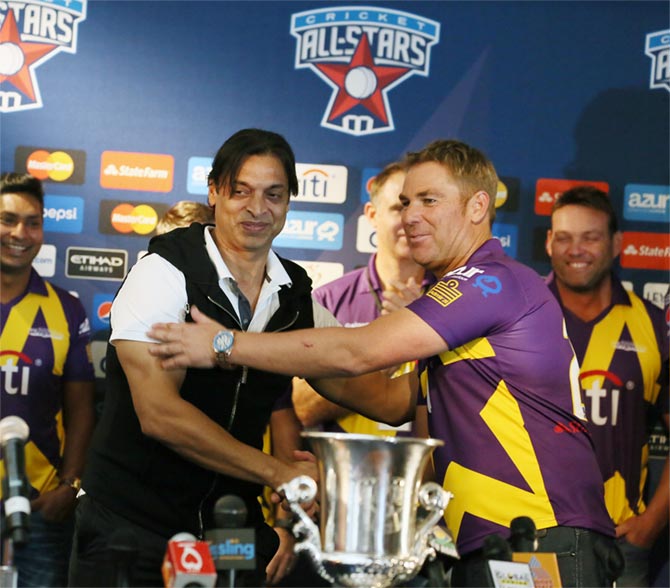 Akhtar, who was a big hit in the first match with his bowling and showmanship, said if the All-Stars series goes to Pakistan it can act as a bridge between the two neighbouring countries.

Besides Akhtar other Pakistani former greats like Wasim Akram, Saqlain Mushtaq and Moin Khan are part of the cricket festival while Virender Sehwag, VVS Laxman, Sourav Ganguly and Ajit Agarkar have accompanied Tendulkar from India.

The first match in New York was won by Warne's Warriors. Akhtar also said he was disappointed at the ongoing stalemate in Indo-Pak series.

"It is now time for both countries to play against each other more regularly and engage in sporting activities. Its about time that Pakistan and India should move forward and play cricket against each other, it will help in bridging the gap between the neighbours," Akhtar said. The fast bowler is playing for Tendulkar's team in the three match series.

"I am playing from Sachin's team and we are enjoying each other's company and getting to know each other better. Pakistan and India must work out the bilateral series," he said.