Third ODI called off due to rain, SA win series 2-0

The third and final cricket One-Day International between India and South Africa was abandoned after rain intervened at the innings break in Centurion on Wednesday.

It started raining after South Africa elected to bat and posted an imposing 301 for 8 in their allotted 50 overs and continued thereafter at Super Sport Park. The Indians did not get to face a single delivery.

The umpires waited till 8:10 local time (11:40 pm IST) before calling off the match. It left the Indians disappointed ahead of the two-Test series, beginning December 18.

The wash-out gave the home side a 2-0 series win, as India suffered embarrassing defeats in the earlier two ODIs, losing by 141 and 134 runs in Johannesburg and Durban respectively.

Before the Test series, the Indians play a practice game against a South African Invitation XI at Benoni, from December 13 to 14.

The 0-2 loss in the three-match contest meant that India failed to win an ODI series in South Africa in four attempts. They lost three earlier ODI tours in the Rainbow nation.

Earlier in the day, Quinton de Kock notched his third successive hundred while captain A B de Villiers also scored a century, as South Africa wriggled out of a tight spot to post an imposing 301 for 8 after electing to bat.

Opening batsman de Kock smashed nine fours and two sixes for 101 off 120 balls to become the third South African, and fifth batsman overall, to hit a century in three successive innings as he helped revive the home side, which was reduced to 28 for 3 in the eighth over.

De Kock, however, is the first batsman to score three hundreds in the same series. With 341 runs from three matches, he is also only the third batsman to score 300-plus runs in a three-match ODI series, after New Zealand's Martin Guptill (vs England in 2013) and Zimbabwe's Brendan Taylor (vs New Zealand in 2011).

De Kock shared a crucial 171 runs for the fourth wicket with skipper de Villiers, who hit his 16th ODI century, to repair the South African innings from 28 for 3. De Villiers struck six fours and five sixes in his 101-ball innings.

For India, pacer Ishant Sharma finished with four wickets 40 runs from his 10 overs, picking his 100th ODI wicket in the process. Fellow-pacer Mohammed Shami chipped in with three for 69, while Umesh Yadav, the third of the pace trio, took one wicket. 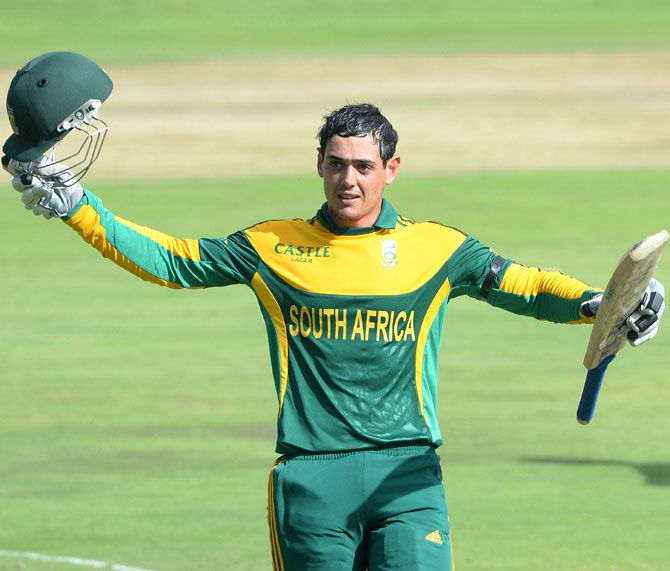 The Proteas' in-form openers Hashim Amla and de Kock began in the same fashion as they did in the previous two matches, with the opening overs of Ishant and Umesh Yadav resulting in a string of boundaries. However, there was a difference this time, as India struck early, and not just once.

First up, Mohammad Shami was successful in breaking the opening stand cheaply. The first wicket yielded only 22 runs, as Amla was out pulling, caught by Yuvraj. He followed up his century in Durban with only 13 runs.

Ishant then got a double break-through, dismissing both Davids (1) and JP Duminy (1) in the eighth over. For the first time in three matches, the hosts felt the heat after being reduced to 28 for 3.

South Africa, however, did not worry too much. After all, de Kock was still batting. He and de Villiers sent the Indian bowlers on a leather hunt. Their progress was slow as they set about rebuilding the innings, and South Africa's fifty came only in the 13th over.

Yadav almost got de Kock in the 17th over, but Ajinkya Rahane put him down at square leg. He was on 37 then.

With no more wickets coming, Dhoni turned to spin from both ends, with R Ashwin and Ravindra Jadeja coming on to bowl in the 18th and 19th over respectively. The duo bowled in tandem for 12 overs, during which the Indian fielders dropped two more catches -- one each off de Kock and de Villiers.

De Kock was let off this time by Yuvraj, who was running backwards from mid-on. It was a tough chance, off Ashwin, and he managed to get his hands to it, but spilled the ball at the last moment. The batsman was on 43 then, and carried on to complete his fifty off 71 balls, in the 23rd over, hitting six boundaries.

De Villiers brought up his fifty in the 35th over, and another over later, de Kock nudged Shami to square leg for a single to score his third successive century in three games this series, and his fourth in ODIs, overall. He used up 116 deliveries for his knock, accelerating in the second half, hitting nine fours and two sixes overall.

His departure signalled the death overs for the hosts and new batsman David Miller and de Villiers put the Indian bowling to the sword as they put up 53 runs for the fifth wicket off only 28 balls.

De Villiers was especially rough, scoring his second fifty off just 25 balls, as he brought up his 16th ODI hundred with a dab to fine leg in the 42nd over. He was eventually out for 109, leg before to Yadav in the 44th over.

Ryan McLaren (6) tried to force the pace but only ended up holing out to deep mid-wicket and becoming Ishant's 100th victim in 70 ODIs.

Miller hung around, smacking his sixth ODI fifty, finishing unbeaten on 56 runs off 34 balls, and helped South Africa reach 301-8 in their 50 overs. 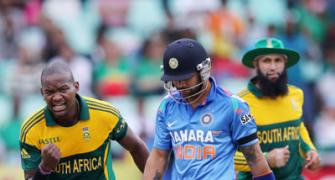 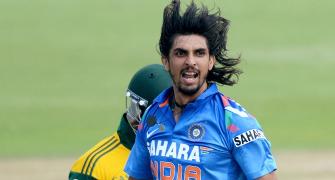 Team India need to reverse the mood in the camp 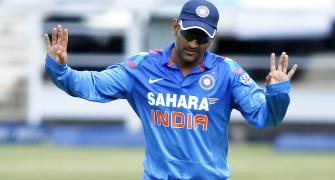 Second ODI: Can the tide turn in India's favour in Durban? 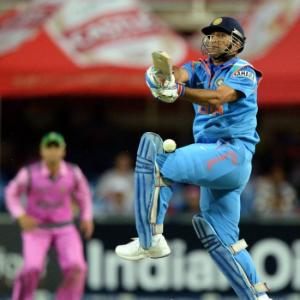 Onus on Dhawan, Rohit and Virat to salvage pride in 3rd ODI 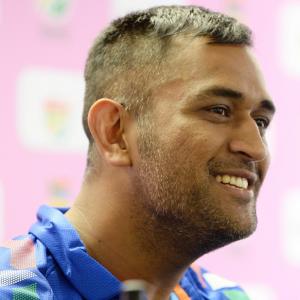 'We can take one positive from the ODI series'