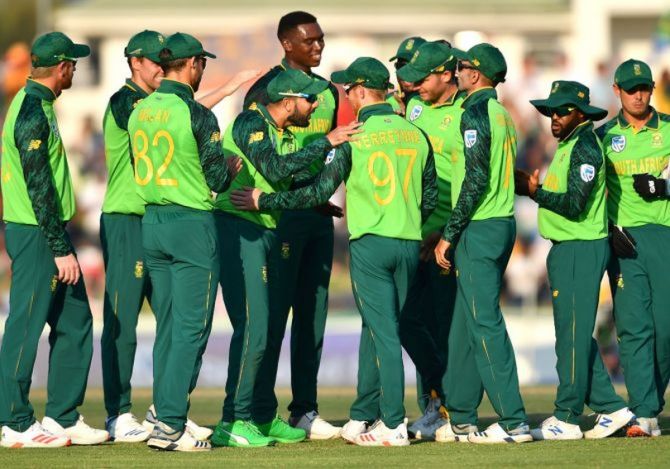 IMAGE: Now with the 2021 T20 World Cup set to be played in India in a year's time, former opener Herschelle Gibbs feels that South Africa players need to work on their mental strength if they wish to finally break the jinx. Photograph: Ashley Vlotman/Gallo Images/Getty Images

South Africa's performances in ICC events have been cases of 'so near, yet so far'.

Playing top-class cricket through the tournaments, the Proteas somehow manage to choke every single time at the business end.

Now with the 2021 T20 World Cup set to be played in India in a year's time, former opener Herschelle Gibbs feels the players need to work on their mental strength if they wish to finally break the jinx.

Speaking to ANI from Sri Lanka as he is busy preparing for his role as a coach in the Lanka Premier League (LPL), Gibbs threw light on factors responsible for South Africa's failure to win a World Cup, his latest love for coaching T20 franchises and his ferocious knock against Australia in 2006 which took the world by storm as smashing boundaries and sending bowlers on the leather hunt wasn't so mainstream back then.

The recently concluded 13th edition of the Indian Premier League (IPL) once again saw some quality performances from South African players such as Quinton de Kock, Kagiso Rabada and Anrich Nortje. But Gibbs believes the problem has never been with producing talented players.

"South Africa always produces world-class players. But it's the big match temperament and dealing with the pressure that's been lacking over the years... until that changes I can't see anything changing," the Colombo Kings head coach said.

Appointed head coach in the LPL, Gibbs had initially landed in the country for a commentary stint. Throwing light on the change of role, the former opener said: "Well, an interesting turn of fate, I would say. I learned that Dav Whatmore, who was earlier named the coach of Colombo Kings had to pull out due to some personal reasons.

"Even his replacement, Kabir Ali, tested positive for Covid-19, so when I was approached, I readily agreed to it. It's my ambition to coach in all the T20 leagues."

During his playing days, Gibbs was famous for his power hitting. The swashbuckling batsman's ferocious knock of 175 off 111 balls in 2006 when the team chased down Australia's total of 434 runs will always be the guiding light for any player on how to master the art of chasing.

Reminiscing that 'kind of a T20' knock Gibbs said Australia had left the South Africans with no options but to fire on all cylinders in order to set another world record in the same match.

"Oh yes! You can't forget that kind of a knock, and that too coming against Australia and batting second. It was a good wicket to bat and the Australians left us with no options but to go all guns blazing, and that is what we did.

"Graeme Smith too was brilliant that day in the chase. And yes, that was really kind of T20 innings, we reached 150 in the 19th over," he signed off.