'We lost wickets at key times. They just hung, hung in and created enough pressure to get across the line but it was just a great final.' 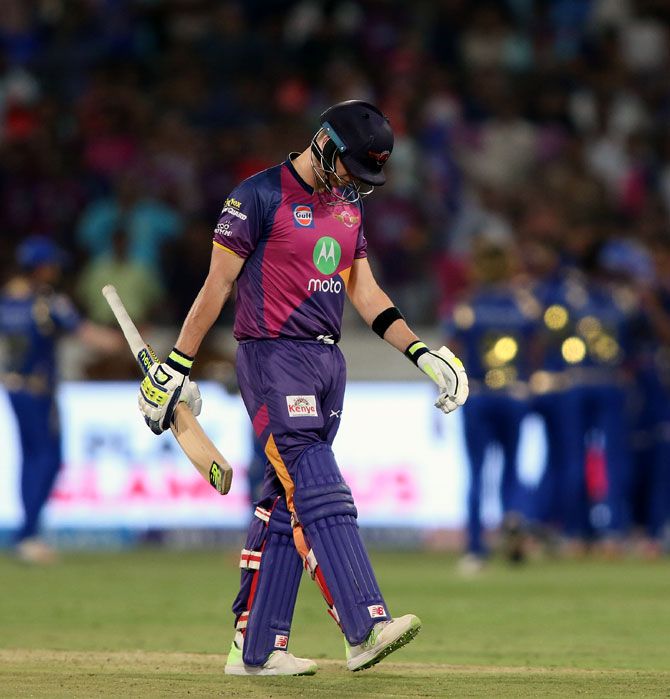 IMAGE: Steve Smith walks back after his dismissal. Photograph: BCCI

Rising Pune Supergiant head coach Stephen Fleming said losing wickets at crucial moments was one of the key reasons for his team's narrow one-run defeat against Mumbai Indians in the IPL-10 final.

Despite ending up on the losing side in a low-scoring IPL final against Mumbai Indians last night, Pune had a relatively successful campaign, especially after finishing a lowly seventh in their inaugural season last year.

"Steve Smith came very close to winning it in the last overs and it could have been a much different story but that was the nature of the game. It was very ebb and flow on what was quite a tough wicket to score on," he said in the post match press conference, in Hyderabad, on Sunday night.

"We knew that it was going to be tough. We knew their bowling attack was top class. We lost wickets at key times. They just hung, hung in and created enough pressure to get across the line but it was just a great final. A grand finish to a good competition," Fleming said.

Fleming said his team failed to build bigger partnerships even though Ajinkya Rahane and captain Steve Smith had put up a good stand.

"We lost wickets, or they bowled a good over. It was never going to be a wicket where they could blast your way through. When we played against Hyderabad, we found that as well. Just batting deep was the best opportunity and we could not get over," he said.

The former New Zealand skipper said though Pune was "not the most skilled side in the tournament", it created an environment for players to excel.

"I am very proud of the combination we put together and the campaign we ran. We would have loved to have sat here for the icing on the cake but it does not change the feelings about the work that we put in during the year to get to this point," he said.

He also praised the role of veteran Mahendra Singh Dhoni in the Pune team.

Replying to a query, Fleming said he and his team just tried to focus on what was in their control.

"We concentrated on getting this game through and finishing as well as we could and then whatever happens after this, I am not sure anyone knows to be honest. It was purely what we could control," he said.