When South Africa's AB de Villiers scored the quickest century on Sunday, he broke more than just an ODI record. Here is how the South African has rewritten cricketing history. 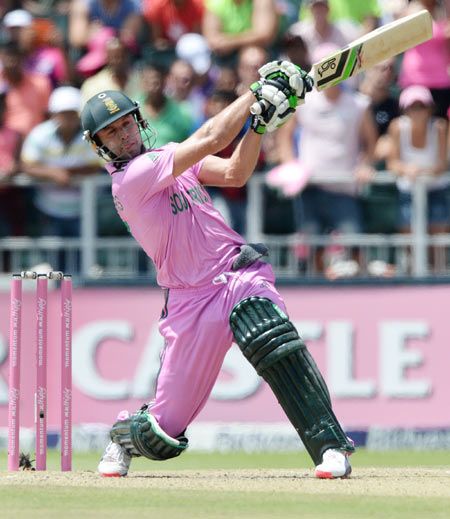 It took AB de Villiers only 16 balls to race to his fifty. In fact his second fifty (off 15 balls) was faster than his first fifty, but record books always take in to account only the first fifty and not any subsequent fifty scored later in the innings. Hence, AB de Villiers will be credited with only 16-ball fifty. Still, it is also a new world record.

Sanath Jayasuriya had taken 17 balls for his fifty against Pakistan at Singapore in 1996.

Here is a ball by ball account of AB de Villiers' innings:

+ The record was only equalled, not broken

Not just One-Day Internationals, AB de Villiers' 31-ball hundred is now the fastest in all limited-over matches or List A matches as they are better known as (more than 23,000 List A matches have been played so far). Take a look:

In fact there has been only one better performance in all competitive cricket across all recognised formats (First-class cricket, List A matches, T20 cricket). Playing for Royal Challengers Bangalore against Pune Warriors India, Chris Gayle scored his hundred off just 30 balls in 2013, which is the only innings faster than AB de Villiers.

Fastest hundreds in all recognised cricket

Note: There have been some faster hundreds than those listed above, but they came in contrived circumstances with bowling sides feeding the batsmen longhops, full-tosses trying to facilitate a declaration from the batting sides. Such performances are not treated as ‘genuine’ records.