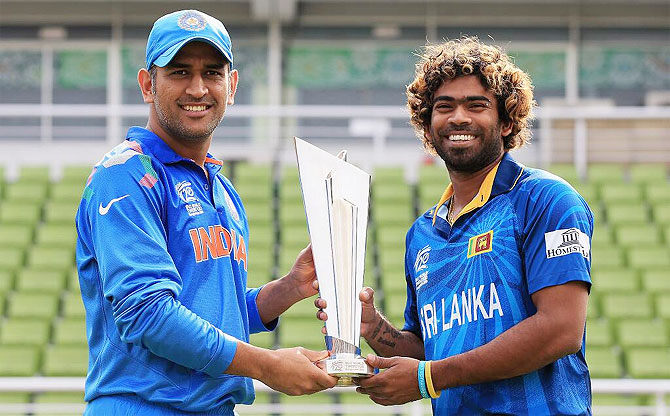 In sublime form throughout the tournament, India will be aiming to become the first team to win the World Twenty20 Championship title for a second time but they will have to fight a gutsy Sri Lanka in what promises to be an exciting summit clash between the sub-continental rivals in Mirpur, Dhaka on Sunday.

Life will certainly come full circle for Dhoni if he lifts the coveted trophy at the Sher-e-Bangla Stadium on Sunday. At the inaugural tournament in 2007, he had led a young team whom nobody gave a chance, to a brilliant triumph.

Since then, India became the No 1 ranked Test nation, won the 2011 World Cup and now they are back in World T20 finals.

The series of triumphs started with the shortest format and it will certainly be an uplifting experience being in that zone again for MSD and his boys.

While current form and history of winning big finals certainly make the 'Men In Blue' favourites, one can't rule out the prophetic statement made by West Indies skipper Darren Sammy.

"The Almighty wants Mahela and Sanga to win a World Cup and leave on a high," he had said after the semi-final loss against Sri Lanka.

So,will divine intervention give the Lankan veterans a victorious farewell or can overriding emotions overpower a team which in all practical terms has been a cut above the others in this competition?

Dhoni has an opportunity to complete ICC tournaments treble 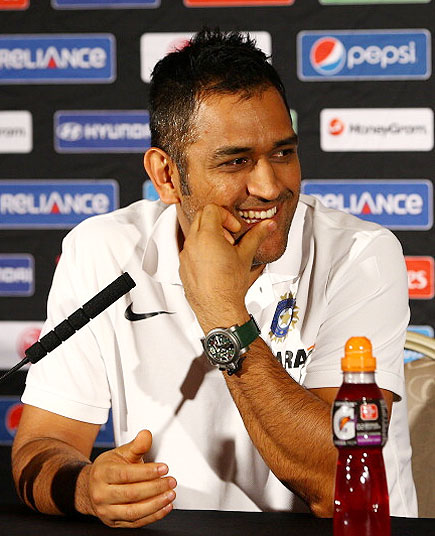 The Indian team has had a dream run in this tournament so far, winning five straight matches including the semi-final with an authoritative display.

Be it about setting targets or chasing them, Dhoni's boys have been up for the task on each and every occasion.

While the spinners led by Ravichandran Ashwin have set up games with superlative efforts, the batsmen, led by Virat Kohli and Rohit Sharma, have ensured that they respect the contribution of the bowlers by winning the matches with minimum fuss.

Such has been the impact of the younger players that Dhoni, considered to be one of the finest players in this format, has not been required in trying circumstances.

But then, the Indian captain is a 'Big Match' player.

The Sri Lankan team and especially Nuwan Kulasekara would not easily forget that final 'Helicopter shot' that went soaring into the Wankhede Stands in the 2011 ODI World Cup final.

The two teams will be meeting in another World Cup final after exactly three years and three days.

The win will also give Dhoni a chance to complete a rare treble in one cycle having also won the Champions Trophy in England last year.

Ashwin has been India's No 1 bowler in the tournament 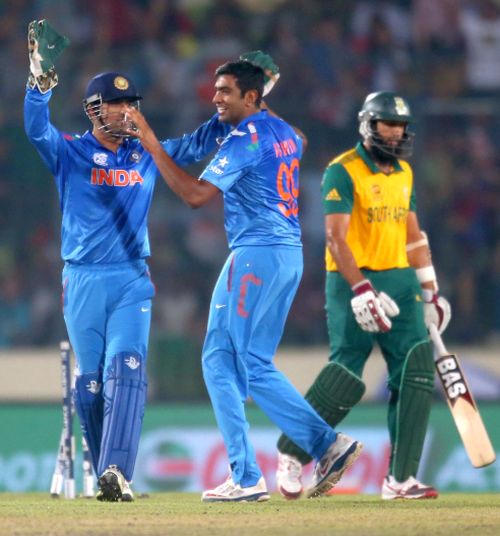 India versus Sri Lanka matches have happened with such monotonic regularity that one has lost count. But since most of these matches were in the 50-over formats. A final in the shortest format has added a new flavour to this rivalry.

Since the players from both teams have been pitted against each other on so many occasions, there is little element of mystery left.

The Indians have a set team and with Ajinkya Rahane having had a moderately good day in office against South Africa in the semi-finals, the doors are shut on Shikhar Dhawan for the time being.

Mohit Sharma was a bit nervous during the semi-final but Dhoni is not known for making changes readily though he has Mohammed Shami on the reserve bench.

The rest of the team is set. Ashwin has gone from strength to strength in this tournament improving with each and every match.

Even when the Amit Mishras and Bhuvneshwar Kumars were being punished by Faf du Plessis and JP Duminy, on Friday, Ashwin came back unscathed with brilliant figures of 3 for 22 and Virat Kohli was spot on in his assessment of the bowler.

"Had Ashwin not bowled brilliantly, the target could well have been 195 and credit to him for the manner in which he bowled," he said. 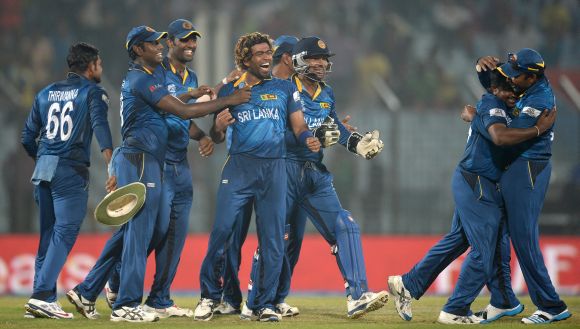 For Sri Lanka, it will be shedding their inhibitions in a big final and at least try to be third-time lucky when it comes to T20 World Cups.

This is their fifth ICC tournament final in seven years and they will certainly want to win it for Mahela Jayawardene and Kumar Sangakkara.

The two legends of Sri Lankan cricket would want to leave the T20 International arena on a high.

They have been champion players in their own rights. The Lahiru Thirimannes and Kusal Pereras would ideally want to give a memorable parting gift to the Lankan legends by winning the Cup.

Chance for Mahela, Sangakkara to leave the game on a high 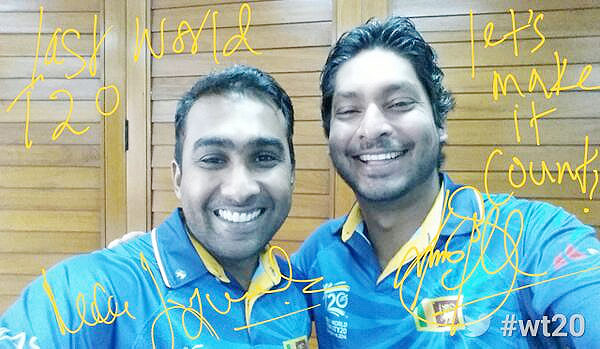 On their part, Jayawardene and Sangakkara would also like to put up a good show in their final T20 International match, especially Sangakkara, who has been woefully out of form.

But one big innings in the final would erase all that.

The affable Jayawardene, who for once did not change his style of batting in the 'slam-bang' version, would like to show his artistry one last time in this format.

The pitch at the Sher-e-Bangla Stadium will not make much of a difference as both teams will be loaded with spinners and have batsmen who are adept at playing against slow bowlers.      Regular captain Dinesh Chandimal might again have to sit out in order to accommodate Herath.

But then winning finals is an art and this Indian team under Dhoni has perfected that in recent times. So it will be advantage India.