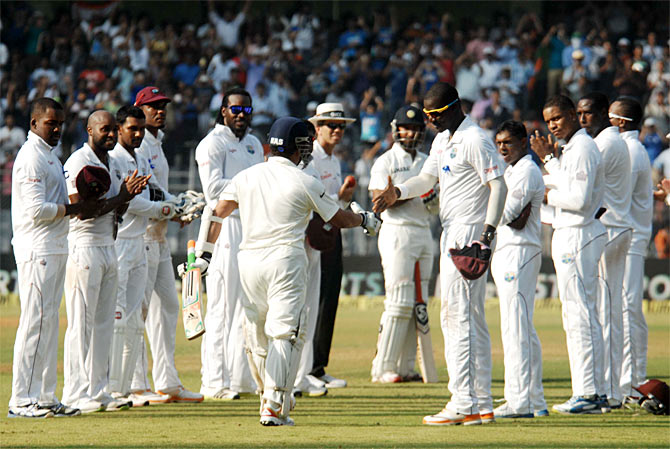 Prasanna Zore, who like many fans, was there at the Wankhede stadium on the opening day of the second Test between India and the West Indies only to see 'God' play one final time, sums up the mood in the stands.

‘God’, all of 5 feet 5 inches, playing his 200th Test match and set to retire anytime in the course of the next four days, had descended on the ground, armed with a piece of wood he had so masterly wielded for 24 long years to enthral Indians on planet earth.

Sachin Ramesh Tendulkar, lovingly and solemnly called ‘God’ by the masses, did not disappoint his followers. Except for a first ball scare, when he nudged a flighted delivery that fell just short of the short leg fielder, ‘God’ delivered.

He played his elegant leg glances, exquisite cover drives, flawless straight drives, all textbook style. He quickly sauntered to 38 by stumps on Day One of the second Test between India and the West Indies.

This climax had been building ever since India asked the West Indies to bat this morning after winning the toss. 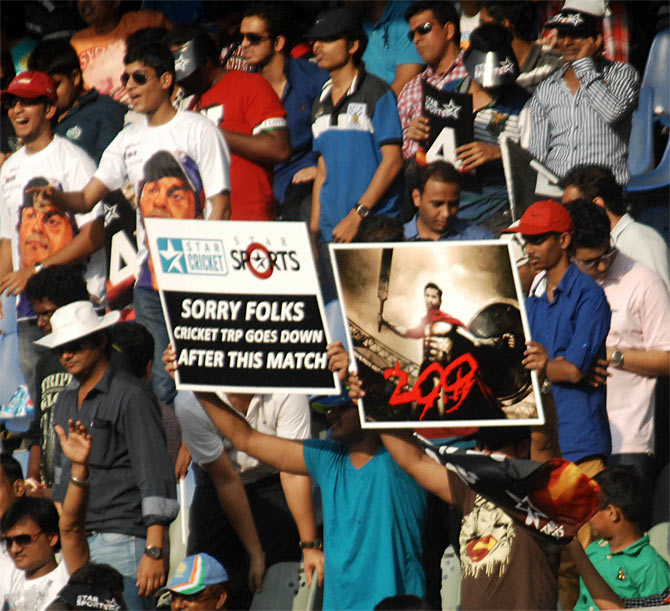 As 11 Indian players took to the field all eyes were fixated on just one man. Not that these spectators don’t love their Dhonis, Kohlis, Dhawans, Sharmas or Shamis.

But every time Tendulkar came to field near the boundary line, or even ran to field the ball, the crowd would go berserk. Ecstatic cries of ‘Sachin, Sachin’ would breeze through the crisp November morning air. Every person in the stadium, depending on her/his capability, would cry hoarse to get the attention of ‘God’.

‘God’, in his trademark style, would throw a glance at them or nod his head in appreciation, without any airs or gimmicks. The most ‘God’ did today – and that sent his fans in a tizzy – was raise his left hand half way up to his shoulder and wave at them. The expressions this elicited from his fans were unfathomable. It was deliverance!

What else could they ask from a person who has helped unite them by breaking the barriers of region, class, caste and religion in a country as plural in these attributes as India! 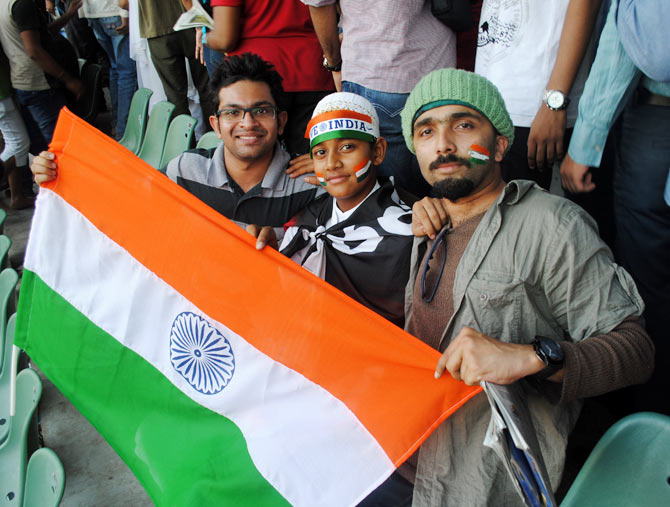 Be it a Bhavin Shah, a Zohar Rehaan, Idris Sattarwala or a Dr Avanti Kadam, Tendulkar is everybody’s ‘God’. He guides them; He delivers joys to them; He makes them forget their sorrows. To see their ‘God’ play one final time, the former two had taken a five-day leave from their respective offices. Idris had come all the way from Coimbatore to watch ‘God’ play; Dr Kadam, a physiotherapist, has named her clinic ‘Tender Care’ to make it sound like Tendulkar.

All four, less than 25 years of age, representing different regions and religions of India, were under one giant roof today to watch Tendulkar play in motion. They not only shared a common space but their emotions, their joys and sorrows too. The entire stadium wanted their ‘God’ to bat, to show His willow wizardry, wanted Him to dispatch the leather ball where they were seated.

For this to happen, they had been praying to God for a West Indian collapse. And God yielded. 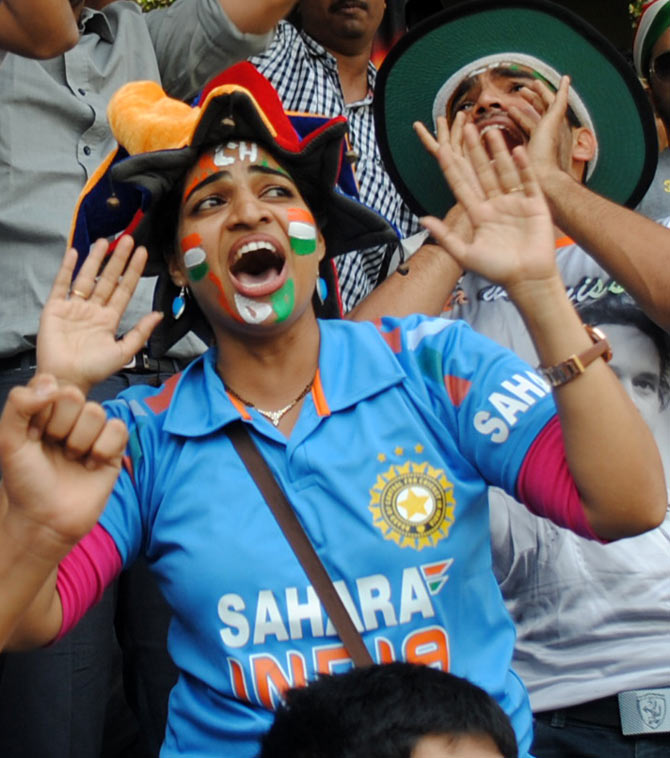 An hour or so after lunch the West Indian innings had folded. But these ‘God’-crazy spectators were restless. They knew India had to lose two quick wickets for Tendulkar to grace the pitch.

And then began a show of unparalleled non-partisanship.

Every West Indian bowler’s appeal got magnified manifold as the entire stadium bayed for the blood of Indian openers Shikhar Dhawan and Murali Vijay and once Dhawan was caught by Chanderpaul off Shillingford, the crowd bayed for Murali Vijay and Cheteshwar Pujara.

They had come to watch ‘God’ bat. They paid for it – though one can safely assume money didn’t matter as much as ‘God’s’ grace -- and howsoever mean it may sound they wanted two quick scalps. The first one fell. They wanted one more. 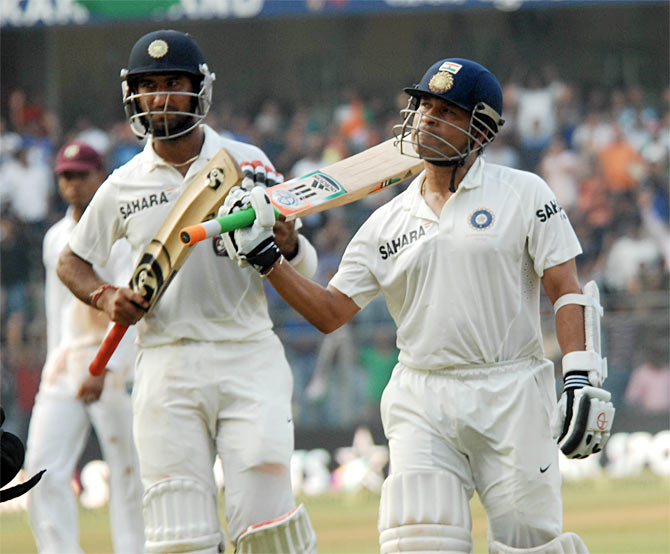 And when the West Indians appealed for a faint inside-edge from Murali Vijay to Darren Sammy in the 14th over of the Indian innings the crowd thought they had it. When Murali Vijay stood his ground, as the field umpire consulted the third umpire for this inside-edge at leg gully, the mean and raucous crowd, blind in their adoration of ‘God’, booed him.

The West Indians thought they were on home turf even if for fraction of a moment.

As soon as the field umpire declared Vijay out, the boisterous crowd drowned the West Indian celebrations.

Without any nudge, without any prompt, the crowd, every one of them, stood in unison as ‘God’ came down from His firmament to bat at number four.

This was the moment the spectators had been waiting for all day.

This was the moment they thought was their deliverance.

“We can’t see God. But we can see Tendulkar. He is our God. He is so real, so ordinary,” said Dr Kadam after stumps were drawn for the day.

She will be back tomorrow. So will be Bhavin and Zohar. Idris is flying back to Coimbatore on Friday morning.

‘God’ retires when He has to. He doesn’t tire when He plays.

Bhavin, Zohar and Avanti will be hoping their ‘God’ scores another ton come Friday.