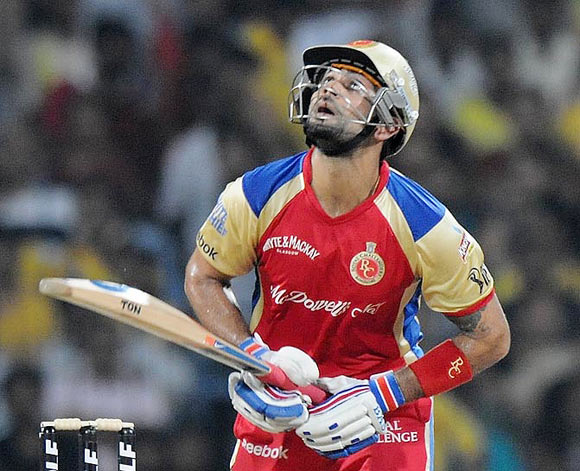 If the last season was all about creating, and consolidating, reputation, this year it's about damaging it. Bikash Mohapatra takes a look at a few players who have done little in this IPL to bolster their credentials.

They were among the top-most performers for their respective teams in the fourth edition of the Indian Premier League.

There was so much consistency in these players' performances that their teams relied heavily on them. To their credit, more often than not, these guys delivered.

A year later, it is sharp contrast. These players have flattered to deceive their franchises and fans alike. If the last season was all about creating (and consolidating) reputation, this year it's been about damaging it.

Here are a few players who have done little in IPL V to bolster their credentials.

The 23-year-old finished only behind teammate Chris Gayle (608 runs) in the list of highest scorers last year.

With an aggregate of 557 runs in 16 matches (@ 46.41) Kohli not only added to his growing reputation but also played a crucial role in Royal Challengers Bangalore's run to the final.

He went on to become the lone bright spot in what was otherwise a disastrous tour Down Under. The Delhi batsman carried on with his good form in the subsequent Asia Cup as well.

His poor form in the ongoing tournament is, therefore, inexplicable.

An aggregate of just 129 runs in seven matches has damaged his team's chances besides denting his reputation as a consistent performer. Fortunately for Kohli, though, his teammates Gayle and AB de Villiers have been among the runs in the last few matches.

Raina is woefully off form so far 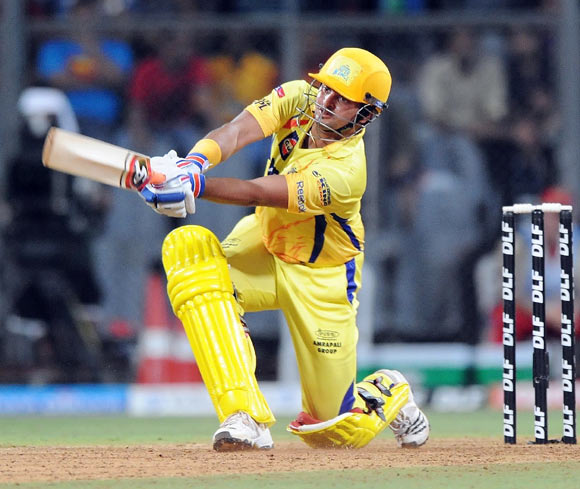 He is a Chennai Super Kings player since the inaugural edition, and with a total of 1951 runs in 69 matches happens to be the highest scorer in the tournament's brief history.

Raina's consistency with the blade was a vital factor behind Chennai's title triumphs in the last two editions.

His aggregate of 438 runs in 16 matches (@ 31.38) enabled him finish seventh in the list of top scorers last year even as Chennai successfully defended their title.

However, the 25-year-old is woefully off form in the ongoing tournament, totaling a meager 138 runs in seven matches.

In fact, it won't be wrong to say his form so far in this edition is an extension of his poor show at the international level.

With Raina not scoring in the manner expected of him, Chennai have struggled to assert their authority in the tournament thus far.

Valthaty is a pale shadow of himself 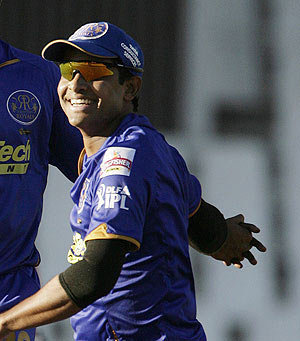 He was one of the stars of the fourth edition, a surprise discovery from the Kings XI stables.

While an aggregate of 463 runs in 14 matches (@ 35.61) earned him a place (sixth) among the top 10 batsmen in the tournament, his spectacular 120 not out against Chennai Super Kings was deemed the 'Best Individual Performance', and earned him a luxury car.

However, not much was heard about Valthaty following the tournament. He returned to open the batting for Kings XI this season but has so far been a pale shadow of the player he was last year.

Since he scored only 28 runs in the first five matches, his team was forced to drop him thereafter.

Kings XI have been trying out various combinations and their performance, as a result, is erratic, to say the least.

Vijay's poor form has forced CSK to drop him 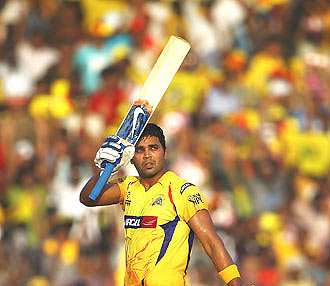 One of the most consistent opening batsmen, Murali Vijay was the star of the show in the final last year, scoring a flamboyant 52-ball 95 as Chennai thumped Bangalore to defend their title.

However, he is in woeful form this season. An aggregate of 31 runs in five matches is self-explanatory.

Chennai have been forced to drop him and promote S Badrinath to open the innings with Faf du Plessis.

With regular opener Michael Hussey still on international duty, Vijay's lack of form has hampered his team to a considerable extent.

A record Aravind can do without 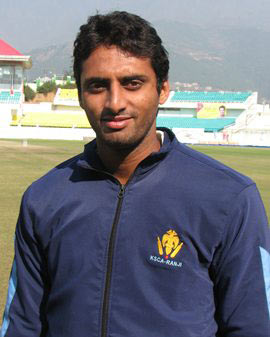 Those reading this might just feel this one is a bit harsh.

Sreenath Aravind has played only one match, one might argue.

However, his performance in the said match, and his record in the previous season, qualifies him for this list.

Aravind picked 21 wickets in 13 matches last year, thereby playing a commendable role in Bangalore's run to the final. He finished only behind the Mumbai Indians duo of Lasith Malinga (28 wickets) and Munaf Patel (22) in the list of highest wicket-takers.

In the ongoing edition, with R Vinay Kumar returning to the fold, Aravind was always going to get lesser opportunities. It was up to him to make the most of what he got.

He was selected to play in the home match against Rajasthan Royals and Aravind was woefully off colour on the day. While nine runs were scored of his first over and 15 from his second, it was in his third over that he gave away a whopping 24 runs.

In that over Ajinkya Rahane hit Aravind for six successive boundaries, a first in the history of the IPL and a dubious distinction that the bowler would like to forget at the earliest.

Aravind got himself a record that he can easily do without.